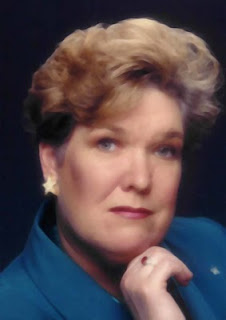 What do you currently have in print and where can we find them?
I have a time travel, Civil War period, CRAIG LEGACY under my co-written pseudonym, Terry Campbell available at Amazon and Barnes & Noble online and my new debut romantic fantasy, IT’S MAGIC by Daryn Cross & L.J. DeLeon, published by Crescent Moon Press and also available through Amazon and Barnes & Noble (the print will release around Thanksgiving). I have three books on backlist as Terry Campbell, MR.WRONG, FAT CHANCE and INTIMATE INVESTOR that should be released on Kindle early next year.

Those sound like fun. What genre do you write? 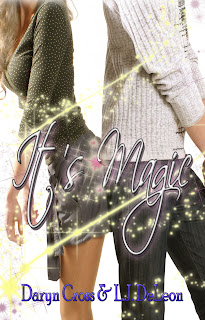 Now I have a two-pronged career in fantasy and suspense. I am marketing my suspense series, set in the small Southern town of Climax, Virginia, but have not sold it yet.

Do you have cats or other pets? Why or why not?
I love cats but am allergic to them. Instead, I have a Chocolate Lab, my third one. The “nutkin” has a sock-fetish and runs our house.

So you can explain what happens to all those single socks. Blame it on the dog. What inspires your stories?
I like to say all my books have a theme of the fight for truth over lies, justice over unethical behavior, the light defeating the darkness

What is your current WIP?
Right now I’m writing the sequel to IT’S MAGIC and need to complete in November. Since I don’t actually have a deadline for it, I got waylaid with writing a novella and planning two more. But, I have to put this baby to bed. It’s about two aggressive snack company execs, workaholics that the mysterious matchmaker Maxwell Magic plans to match. Magic is Santa on his offseason. These two execs have all sorts of family and past-history issues and Magic’s having a heck of a time bringing them together, but he knows he will because Magic knows everything. In my first in the series, IT’S MAGIC, the two lovers are a feminist writer of the books, “Prince in Rusted Armor” and “Why Do Dogs Put Up With Them?” and a man’s dream radio psychiatrist on a show, “Men Talk to Me First.”

Can true love exist between a man who believes a woman is capable of sticking a shive in his heart while making love and a woman who is convinced men think with only one head? Maxwell Magic, an eccentric mysterious matchmaker swears it can and he’s the man to provide the stimulus to make it happen. Kasey Bell, feminist writer, and Guy McLane, radio’s famous chauvinistic psychiatrist, are his targets. Even with carefully executed plans, the road to true love is strewn with mishaps, mirth and money-hungry nighttime talk show hosts. Will Kasey and Guy risk their reputations by exposing secrets buried beneath layers of shame and self-doubt for a desperately needed big money pay-off? Or, will they claim what has evaded them their entire lives—a love that lasts forever?

Okay, I'm interested. Sounds like a fun read. What characters are your favorites from your books?
How do you pick a favorite child? That being said, some of my favorites include Honey Blood Draper, my heroine in my yet to be contracted book, HONEY BLOOD AND THE COLLECTOR. An elf with rare blood joins with her intended mate to defeat an evil wizard threatening to destroy their race. Honey Blood has what they refer to as kickassitude, the kind of female who will go where other fear to tread. In my latest book, IT’S MAGIC, I fell in love with my hero. Guy McLane is a cocky man who believes he can conquer the world and who, instead, falls to his knees for Kasey. Smart to a fault, he falls in love with both the heroine and her children and even abides the Lab who sh**s in his shoes.

Thanks for stopping by, Daryn. It's great to meet you!