This is a good soup; quick and easy. Feel free to mix up the vegetables.

Melt butter in large heavy saucepan. Sauté onion, bell pepper, and celery until tender. Stir in shrimp with marinade and mushrooms. Cook on med high heat until shrimp is done, about 5 minutes. Add water chestnuts and coconut milk, stir in one can of water, cook just until heated through.

I had a couple of little acorn squash on my counter and some hamburger in my fridge. So of course I went straight to the idea of making meatloaf and stuffing it into the acorn squash. It turned out very tasty.

Acorn squash is a variety of winter squash - it has a hard rind and pale yellow to dark orange flesh depending on which variety you buy. Look for hard squash with no soft spots. They should be heavy for their size and shouldn't rattle when you shake them. If it does, it means the squash is old and the seeds have come loose.

To pick a good meatloaf, look for ones that are not green on the outside and are firm to the touch. Ha! You don't buy meatloaf in the produce section, you should know that. You make your own.

Cut the squash in half lengthwise, scoop out the seeds. Cut a small sliver off the side of the squash so it will sit flat and not roll. The seed cavity should be facing up. Set the four squash halves in a baking dish. Sprinkle with salt and pepper.

Mix hamburger, oatmeal, onions, peppers, sauces, and eggs until blended. Scoop the meatloaf into the acorn squash. Don't mound it too high. You should only need about the half the meatloaf mixture. Pile the rest of the meatloaf in a mound in the middle of the dish. You'll have four stuffed squash halves plus a small meatloaf in the pan.

Bake at 375° for 45-55 minutes, until squash is tender and meatloaf is cooked through.

This goes great with mashed potatoes and a green salad.
No comments:

I recently read Quiet, by Susan Cain. It was very enlightening. Susan Cain explores what it means to be an introvert in a world that rewards extrovert behaviors. I've realized I am very much an introvert. I need my alone time, my quiet spaces with no social interaction. My husband, who for years has claimed to be an introvert, is really an extrovert. He likes crowds. He thrives on social interactions. He gets energy from these where I am just drained afterwards. Understanding these differences is helping us better understand each other.

As part of the book, Susan Cain explores different occupations that introverts tend to be drawn to. No surprise that writing is one of those. She quotes Kafka on what it is like to be a writer. He's speaking to his wife:

"You once said that you would like to sit beside me while I write. Listen, in that case I could not write at all. For writing means revealing oneself to excess; that utmost of self-revelation and surrender, in which a human being, when involved with others, would feel he was losing himself, and from which, therefore, he will always shrink as long as he is in his right mind . . . That is why one can never be alone enough when one writes, why there can never be enough silence around one when one writes, why even night is not night enough."

Someone else, I can't remember who but I would love to know the source of this quote, said: Sharing your writing is like walking around naked in front of everyone.

I know I have a very hard time writing if anyone else is sitting near me. It's an intensely private and personal endeavor. I struggle to scrape away the distancing words and phrases and let the raw emotions onto the page.

And then what do authors do? We put those naked screaming emotions out in public for everyone to read.

If you want to understand introverts and extroverts better, go read Quiet. It's worth the time.
No comments:

Here's the creamy original version, lightened up just a bit. In Utah, these are commonly made with frozen shredded hash browns and called Funeral Potatoes, because they're traditionally served after funerals. They mostly use canned cream soups, too. Google "funeral potatoes" and you'll find plenty of recipes.

Slice potatoes into 1/4" thick slices. Place in a saucepan. Add enough water to barely cover them. Bring to a boil. Reduce heat to a simmer. Cover and let cook for 15-20 minutes, just until tender. Drain.

Meanwhile, melt butter in a saucepan. Stir in flour. Cook until bubbly and hot. Add milk a little at a time, whisking smooth between each addition. Add spices. Bring to a boil, stirring constantly. Boil and stir for one minute. Remove from heat. Add 2 c. of the cheese. Stir until cheese is melted.

Layer potatoes in a 2-quart casserole dish. Pour the cheese sauce over the top. Bake at 350° for 30 minutes, until hot and bubbly. Sprinkle with the remaining 1 c. of cheese. Bake another 5-10 minutes until the cheese is melted and slightly browned.

For an even lighter version, reduce the cheese to 1 c. in the sauce and none on top.
If you leave the peels on the potatoes, it boosts the fiber content just a little.
You can add chopped ham, diced onions, diced bell peppers, diced green chilis, or crumbled cooked bacon, if you want this as a main dish instead of a side.
No comments: 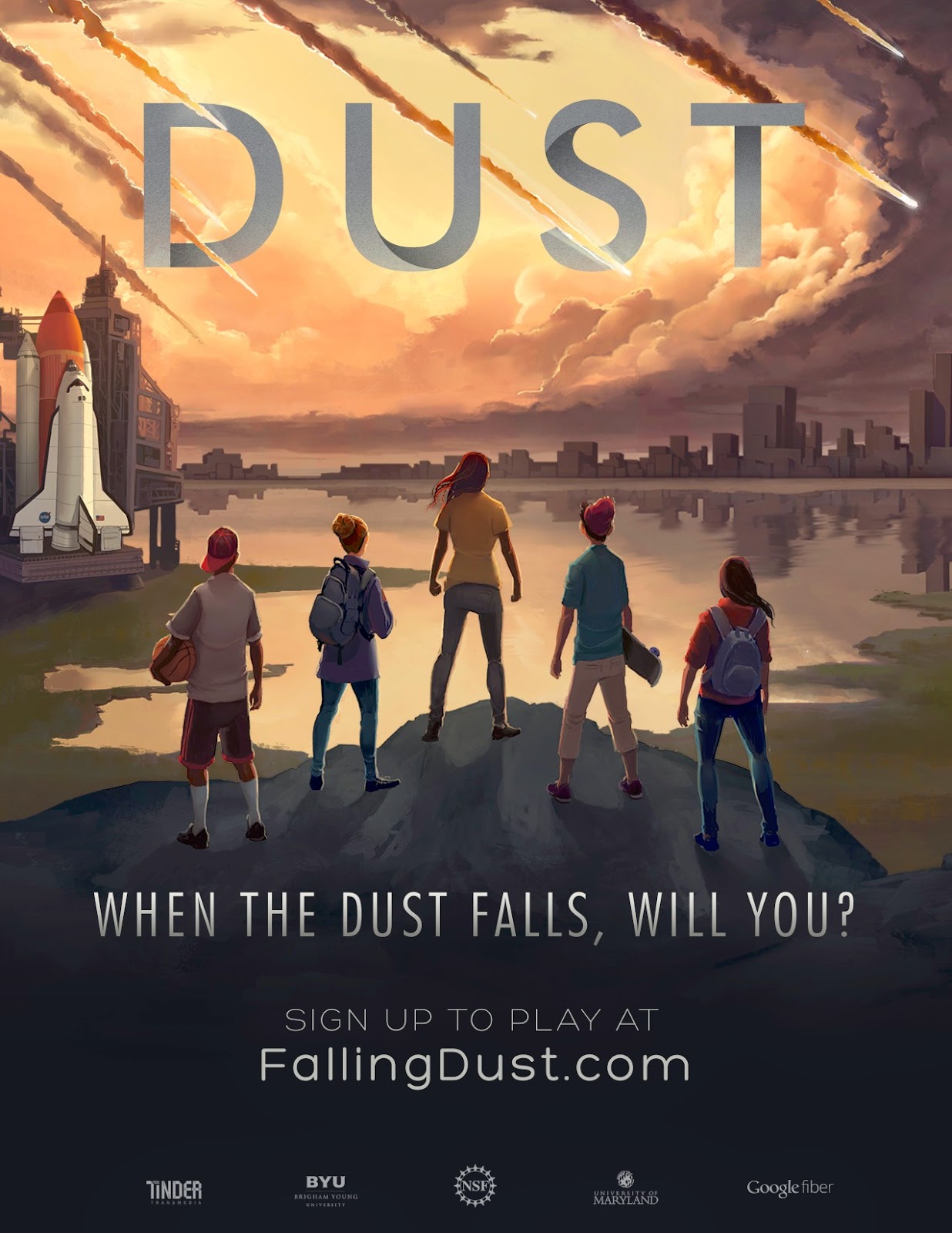 I'm involved in this and it should be great fun. The game launches on Jan. 26. It's aimed at teenagers. If you've got kids that age or you are that age, go check out the website and sign up.

The team is working hard to get all the finishing touches in place.

Or all rotten potatoes, as my family likes to call them. The non-GF non-DF version is coming next week.

And yes, I know au gratin potatoes are supposed to have cheese in them. These are technically scalloped potatoes. I could have added goat cheese to them, but I can't stand the stuff.

Slice potatoes into 1/4" thick slices. Place in a saucepan, add warm water just until slices are covered. Bring to a boil. Reduce heat. Cover the pan and let simmer for 15-20 minutes, until potatoes are tender. Drain.

Meanwhile, pour rice milk into a saucepan. Add all the spices. Bring to a boil. Add cornstarch. Cook until thickened.

Arrange potatoes in a 2-quart casserole dish. Pour the sauce over the top. Bake at 350° for about 30 minutes, until it's hot and bubbly.
No comments:

Since this is the first Monday of 2015, it must be time to post a list of resolutions and goals for the year. So here's mine:


Those are my writing/professional goals. We'll see where the year takes me career-wise. That's still wide open although I do have ideas about where I want to be by the end of the year.

My personal goals:
What are your goals?
No comments:

Well, not quite, but close. Instead of lots of different kinds of eggs, this has lots of add-ins to spice it up. Feel free to personalize it however you want.

I've found eating protein for breakfast helps me feel better during the day. Since one of my goals for 2015 is to eat healthier so I can feel better, I'm working on breakfast first. Skip the sugary cereals and pastries, cut back on the carbs in general, beef up on the protein and veggies and fiber.

I also ran across a life hack that suggested cooking scrambled eggs/omelets in your waffle iron. I haven't been brave enough to try it yet. If anyone does, please let me know how big of a mess it made and how well it worked.

Using a non-stick frying pan, spray it lightly with cooking spray. Put over medium heat and let it get hot while you mix up the eggs.

Beat eggs and milk until smooth. Add mix-ins, salt, and pepper. Stir until mixed. Pour into hot pan. Let cook for 1-2 minutes, until it starts to set up around the edges. Stir gently with a spatula. Continue to cook until eggs are set and as dry as you prefer. Sprinkle with cheese. Eat as soon as the cheese melts.