I have a thing for pirates. I love pirate movies, most of them anyway. So when I saw pirate movies on Netflix DVDs, I had to add them to my queue.

Buccaneer's Girl (1950) was a great movie. I didn't have a lot of expectations going in, but found myself enjoying it immensely. The acting is pretty decent, the costumes funky, and the story solid. The songs, yes it is a musical, are short and sweet and easy enough to live through.

Debbie is a stowaway on a pirate ship. She's running away from an unsatisfactory life, looking for a better one. She's got attitude and spunk leaking from every pore, but not in the grumpy annoying modern teenage fashion. She's light-hearted, mostly happy, but she doesn't take anyone's garbage.

Of course the ship she's on is captured by the notorious pirate, Baptiste. Yes, they fall in love. The romance is understated and very fun to watch. I won't say anymore because I don't want to spoil the movie for anyone.

I've been involved in a lot of discussions about what makes a strong female character. For me, this movie totally nails it. Debbie is strong without being witchy. She knows her own mind. She has her own goals and ends. She is definitely her own person. She doesn't need a man to define her. The relationship she builds with Baptiste is an equal partnership. And so what if she decides she wants to get married? It's her choice, completely. And she won't settle for just any man. She isn't looking for someone to dominate her or run her life. She wants someone who offers her respect, autonomy, and the space to still be herself.

It's an awesome movie. If you can find it, spend a couple hours to watch it. It was a fun romp.

5 stars
G - mild sword fighting with no blood and obviously fake stabbing, very mild suggestive lyrics and dance in one song
No comments:

I can't believe I haven't posted this recipe. This is my go-to dessert in the fall or anytime I have a pile of apples sitting around. I did post recipes for berry brown betty, peach cobbler, plum cobbler, and mixed fruit cobbler. But no apple cobbler. It deserves a post of its own, so here it is.

Peel, core, and slice the apples. Drop the slices into the lemon water. Save the cores and peels for apple jelly.

Drain the slices and place in a large mixing bowl. Add the tapioca, sugar, cinnamon, ginger, allspice, and cardamom. Toss until the apple slices are coated and the spices are evenly distributed. Dump into a 9x13 baking pan. Set aside.

Melt the butter. Add the oatmeal and brown sugar. Stir until mixed. Sprinkle over the apple slices.

Bake at 350° for 50-60 minutes, until apples are soft and top is browned. Serve hot with plenty of vanilla ice cream or whipped cream. Or try strawberry ice cream for a different taste.
No comments:

I was a vendor at my first ever craft fair. I've attended quite a few over the years, just never as a vendor. My friends and I took our collection of crocheted stuff and sold it.

We did pretty well. I made more money than it cost me to be there. But then I spent it at other vendor booths. My little bit to help the economy.

We're looking for other craft fairs to attend so if you know of any in Washington near tri-cities or Moses Lake, please let me know.

If you want to buy any of my crocheted things, I'll be happy to work out a mail-order deal for you. Send me an email, please. jaletaclegg @ gmail.com 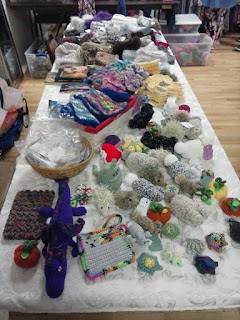 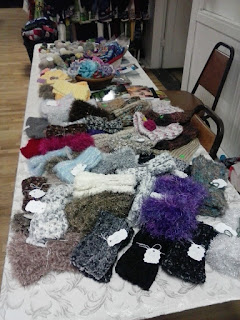 That's all just my stuff. My friends didn't make it the first day, but I had no problem filling a 9 foot table by myself. I think my yarn addiction is getting out of control...
No comments:

Apple jelly is really easy to make and very tasty. Next time you're peeling and coring apples, save those scraps to juice for jelly.

Pack the peels and cores into a 2 or 3 quart saucepan. Pour the 6 c. of water over the top. Place over high heat and bring to a boil. Reduce heat, cover, and simmer for 15 minutes. Turn off the heat and let it sit for 4-6 hours.

Carefully drain off the juice into a measuring cup. You need 5 c. total of the juice. Add a little extra water if you come up short. Discard the juiced peels and cores.

Pour the 5 c. of juice into a large pan (I use my 5quart stew pot for this). Add the pectin. Bring to a boil, stirring all the time. Once it hits a full, rolling boil (it keeps bubbling even when you are stirring), add the sugar. Keep stirring while you bring it back to a full boil. Boil and stir for 1 minute.

Remove from the heat and pour into hot pint jars. Seal and process the jars.

Makes about 3 pints.
No comments:

I Have a New Purse

I'm sure that title just reached out and grabbed you by the throat and screamed, "READ ME NOW!" Totally gripping. Yup. Not boring at all.

Yeah, I struggle with titles. I spend hours trying them out in my head only to be met with shrugs when I run them past my kids.

I remember years ago picking up a book by an author I'd never heard of before and being so intrigued by the title that I just had to read it. A Thousand Words for Stranger did not disappoint. Julie Czerneda gained a new fan that day. I love her books. And I'm glad I took a chance on a book simply because it had such a fantastic title.

What titles have reached out and grabbed you? Or what titles would you love to see on a book someday?

And I do have a new purse. My poor tribble was dying after many years of faithful service lugging my wallet, keys, and junk around. But my laptop didn't quite fit. It does fit in my new purse. Plus, I have a pocket just for my current crochet project for those times when I'm stuck somewhere and need to keep my fingers busy. And lots more pockets. I have pockets that are still empty.

Bonus: My teenage daughter told me it was a hideous granny purse. Score!

I'm a day late and a dollar short. Like usual lately. I got busy and forgot to get the recipe post up. Too many apples. Too many errands. Too many everything!

Apple butter is like a cross between applesauce and jam. It goes great on pancakes, waffles, muffins, toast, biscuits, and pretty much anything else you'd put jam on. It was really easy to make, too.

Save the peels and cores to make apple jelly. It's easy and tasty and very pretty. I'll post the recipe next week.

Fill a large bowl half full of cold water. Add 2 T. of lemon juice to the water. Set aside.

Peel, core, and slice the apples, dropping them into the lemon water bowl as you work. This helps keep them from turning brown.

Drain the slices and dump into your crockpot. They should fill it pretty much up to the top. Add 1/2 c. water. Sprinkle 2 T. lemon juice over the apple slices. Cover and cook on high for 3-4 hours until the apples are soft and starting to fall apart. Stir them really well to break up the chunks. If you stop now, you have applesauce. The apples should have broken down to only fill the crockpot about half-way.

Remove the lid and continue to cook for another 4-8 hours, stirring every hour or two. The applesauce should turn caramel brown as it reduces. When it's really thick and down to about one-third of the starting volume of applesauce, it's done.

Package it into hot pint canning jars and process to seal. OR let it cool down and put into airtight containers and keep in the fridge for up to a month.

Makes about 2 pints of apple butter.
No comments:

I've been researching folklore lately. You can't live near the Cascade Mountains and NOT research Bigfoot, aka Sasquatch, at least a little. Giant hairy apes living in the forests that instinctively know how to avoid scientists and people with good cameras? Yeah, right. I'm usually a skeptic.

But, years ago, I had my own close encounter with Sasquatch.

I was just a few days shy of my twelfth birthday. My dad had decided to take me and some of my siblings on a backpacking trip with one of his friends in the Uinta Mountains in Utah. The plan was that we'd live on ramen, hot chocolate packets, and the loads of fresh trout we were going to catch.

Early one morning, Dad, his friend, and my older brother had gone off to a nearby lake to go fishing. My sisters and I were back at the camp next to another lake. I didn't want to fish, so I went off exploring around the lake. The fish weren't biting.

These lakes weren't very big, but there were a lot of them in the area. It's beautiful country. We were the only humans for miles around. Or so we thought.

I came around one end of the lake and found a stretch of muddy bank. And right in the middle of the mud, was the biggest footprint I think I've ever seen. It looked like a barefoot human foot, but not even my dad had feet that big. He'd also gone the opposite direction.

I poked around, looking to see if someone else was camping, but found no trace of anyone in the area. Just that lone footprint.

To this day, I have no idea where it came from. Did Bigfoot come to the lake to drink during the night leaving only his bare footprint behind? Maybe.

I halfway hope that's the truth, because I'd love to believe there's a lot more mysteries on this planet than we think.
No comments:

I have neglected to post this recipe. Clam Chowder is one of my all-time favorite soups. This recipe is a great base to build on for many types of soup. Feel free to add in clams for clam chowder, corn for corn chowder, or whatever else you like.

Melt butter in a large pot. Add onion. Cook and stir for a few minutes, until onion is soft. Add celery and garlic. Cook for another  minute. Add in carrot, potatoes, chicken boullion, salt, pepper, and water. Cover and simmer for about an hour, until vegetables are tender.

Mix milk and cornstarch. Stir into soup. Simmer on low for about ten minutes until soup thickens. Adjust seasonings if needed.

Fun Anthology - Tales from the Underground

I've got a story in this collection. They all involve caves and/or underground. The genres are mixed - science fiction, fantasy, and horror.

It's up for pre-order now. The book will be delivered October 6, so grab it while the grabbing's good! 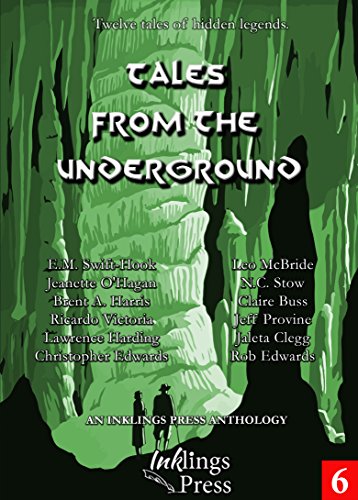 Tales from the Underground: Twelve tales of hidden legends

Under our feet lie countless realms of possibility. Join twelve writers as they explore those realms - discovering lands of fantasy, lands from our far future, lands of mystery. There are places full of wonders, full of terrors, full of visions of what could be. Join us, down here, in the dark.
No comments: