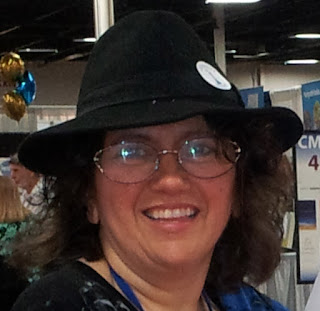 Karina Fabian, former Air Force officer, mother of four and wife to the best man ever, writes science fiction, fantasy, comedic horror and whatever else comes to mind. Her books are a blend of high stakes and low humor, running the gamut from serious novels about nuns working search and rescue operations in space to the comedic trials of Neeta Lyffe, Zombie Exterminator. She’s rebooting her DragonEye, PI series, which involved a dragon working as a private detective in the Mundane world. Her blog features a long-running Star Trek parody: Space Traipse: Hold My Beer, where the adventures are crazy and the humans even more so. Check out her website at http://fabianspace.com

Here's her story behind the recipe -

One of the things I most looked forward to when joining the military was going overseas. Of course, I had not counted on meeting the man of my dreams only five months before I was assigned to San Vito, Italy! Rob and I met in January and got engaged in March, and I left the countryin May. I returned in November to get married and go back again.


He was also an officer in the Air Force, and assigned to Texas. Thus began our two-year, intermittent honeymoon, where we saw each other for two weeks every six months, with half the time me traveling to the US and half him traveling to Italy.
One of his favorite Italian dishes was spaghetti ala carbonara – who can resist bacon and pasta? – but I was hard pressed to find a good recipe. Fortunately, one of my fellow flight commanders, a first generation Italian-American, understood the importance of good cooking in a marriage, and gifted me with a lovely Italian cookbook that had a great recipe. I’ve adapted it slightly over the years to the recipe you see here. It’s simpler, but still as good. How do I know? We’ll be happily married 28 years in November, and have four kids!

Spaghetti ala Carbonara
Spaghetti
2 eggs
2 egg yolks
¾ or 1 package of bacon (preferably thick cut), cut into one-inch squares
½ cup shredded Italian cheese (Italian mix will do; otherwise – parmesan & pecorino)
¼ cup heavy cream or canned milk
1 tsp black pepper
3 Tbs dry white wine (optional)
5 Tbs olive oil
1 garlic clove, crushed
Feeds 4-6 people
Prepare Spaghetti (or any pasta) according to instructions on box.
Heat the oil in a large, deep frying pan and sauté the garlic until brown. Discard the garlic and add the bacon.
In a large bowl (big enough to hold the spaghetti when done) beat the eggs and egg yolks. Add the cheese and the pepper. Mix, then add the milk. Go slowly on the milk until you get a consistency you like. (We prefer more egg and less milk at our house). If the bacon is warm but not too hot, add it and some of the olive oil.
When the spaghetti is done, drain it thoroughly, then add it to the mix. Toss well. The heat of the spaghetti will cook the eggs partly so you get a yummy, thick sauce. Serve immediately.