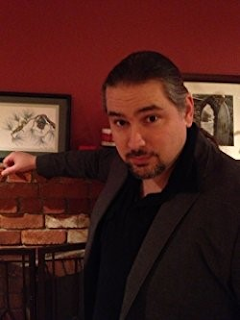 Scott James Magner is a writer, editor, designer, developer, and worldbuilder. In addition to his published fiction, his work appears in tabletop and online role-playing games, card games, miniatures games, and board games. He has a passion for movies and classic science fiction, and spends his days tweaking and twisting new universes.

You write video games. Tell me more about that.
It’s nice work if you can get it. (insert laugh.) But seriously, it’s the most fun I’ve ever had getting paid. Every day is a challenge, and the result is something literally millions of people have enjoyed.

How does writing a video game story differ from a book?
It’s a lot like writing a movie script, without that pesky need to describe the scene. You’re free to focus on developing characters and plotlines, knowing that you’ve got level designers at your back to make the world pop.

Here’s an example. I wrote an original plot for a game once, then went back to writing the day-to day stuff that makes the video game world happen. Then out of nowhere, my plot was in the game, with quests and monsters and BAM right there on the screen, transformed into a play experience I could never imagine on my own. To then come in after those great designers and craft a fully realized story to go with their work is/was exhilarating, and 8 years later I’m still working on that game.

The money’s nice too. I like having electricity, food, clean water. That sort of thing.

Anything else you’d like to add about writing video games?
I think all novelists should give it a try. It’s really strengthened my dialog skills. I also think many writers would benefit from >playing< video games, specifically to observe the pacing of quests and how to reveal information through plot without exposition dumps.

What got you into video games in the first place?
I’d spent a few years doing marketing work, and not writing. After the global downturn in 2008, I found myself with quite a bit of time on my hands, so I started writing again.

About the time I was running out of money, a friend got hired to build a team of writers for a game. I told her if she needed a story guy, I was her man. Three days later I had a contract, and it’s been a crazy decade of worldspinning ever since.

Tell us about your writing - What genre do you prefer to write? What books, stories, other publications that you've written are your personal favorites? Anything new coming up?
I primarily write science fiction, though half of my output is considered fantasy.

I believe science fiction is the art of the possible, that if you can explain why or how something happens in your story, it’s a better fit for that audience. Big, epic spectacles like STAR WARS are pure heroic fantasy, with magic (the Force), enchanted weapons (lightsabers), and iconic heroes and villains. That George Lucas’ intent was essentially to write Flash Gordon fanfic is not lost on me, but he hit the world’s need for pure escapism right on the head, and certainly didn’t miss me with the blow.

I mention this, since my novel HOMEFRONT is essentially George Lucas fanfic writ large. I think it’s the finest thing I’ve ever written, and I’m still writing new stuff in that universe. I’m also quite proud of BLOOD AND ASHES, my true romance tale with gladiators fighting zombies, on the last day of Pompeii.

What about you as a person? What do you do to relax? Favorite movies or tv shows? Hobbies?
To relax, I meditate, play video games, read, and listen to music. I watch anything genre-related on television, including crime dramas (I also write horror and mysteries).

What gets your creative juices going? Do you write to a music, and do you want to share your playlist?
When it’s time to write, my brain won’t let me do anything else. I’m never really “blocked” but there are days when the words aren’t there. Even then I can bang out a few chapter outlines, with the goal of coming back to them when the time is right.

I do have a playlist of loud, shout-along music I use for writing big scenes in my space opera books. And since we live in the future, my Echo or iPhone can provide it wherever I go! 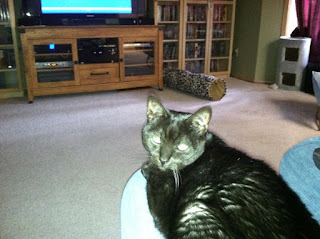 Medea Cat is not amused by this question. All hoomans must have cats.

What organizations do you recommend for those wanting to become writers? Any advice you'd like to share about writing?
Butt in chair, hands on keyboard. Nobody’s going to write your story for you, and only you can tell it the right way.

I belong to a few professional organizations, but they’re not really for writers who are just starting out. Despite the craziness, I recommend online groups on facebook, tumblr, or wherever your tribe gathers. Meet some people with similar interests and skill levels, then develop your craft by writing stories and sending them out. First for critiques, then for publication.

Rejection stings, but it really does is make you stronger.

What writers inspired you to become an author?
As soon as I found out people got paid for writing books, I knew that was what I was going to do with my life.

If you could travel to any time in history, when would you visit? I’d go forward, rather than back. I want a future full of hope, not a past tangled in lies and misdirection.

If you could have dinner with any of your characters, which ones would you choose? What food would you serve?
I’ve written telepathic space aliens, spies, popes, emperors, medieval knights, and gladiators, so it’s a bit hard to pick.

But truth be told, I’d pick a character from one of my best received, yet criminally unpublished short stories, a grizzled old cowboy superhero who’d just like to save the world, if only the world would let him.

If you could travel anywhere, on earth or off, where would you go?
In the 60’s, we sent men to another world, then left it behind because we had poor ratings. The fact that we don’t have a working moonbase is infuriating to me, and I’d love to go there for a day, an hour, a lifetime.

What color would you wear if you had only one choice?
Blue. Colorful enough to complement, dark enough to blend in anywhere.

Describe your dream writing spot.
Someplace cool and comfortable, with no distractions I don’t bring in myself.
So, Moonbase.

Sounds like a great place to write. What an interesting life you have! Thanks for sharing it.