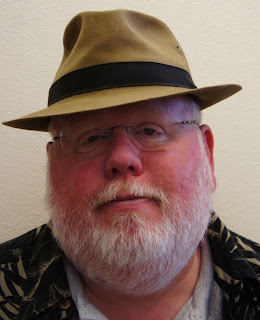 S. Evan Townsend has been called "America's Unique Speculative Fiction Voice" and writes novels that cause thrills and rapid page-turning. After spending four years in the U.S. Army in the Military Intelligence branch, he returned to civilian life and college to earn a B.S. in Forest Resources from the University of Washington. In his spare time he enjoys reading, driving (sometimes on a racetrack), meeting people, and talking with friends. He is in a 12-step program for Starbucks addiction. Evan lives in central Washington State with his wife and has three grown sons. He enjoys science fiction, fantasy, history, politics, cars, and travel. He currently has ten published fantasy and science fiction novels. You can learn more about him at his website sevantownsend.com.

Tell us about your writing - What genre do you prefer to write? What books, stories, other publications that you've written are your personal favorites? Anything new coming up?
I prefer to write science fiction with as much science fact as possible. Although I have written five fantasy novels (of my ten total published novels), science fiction is my favorite. Asking which books are my favorite are like asking which of my children is my favorite. But I am partial to Agents of Artifice (a fantasy) and Treasure of the Black Hole (science fiction). 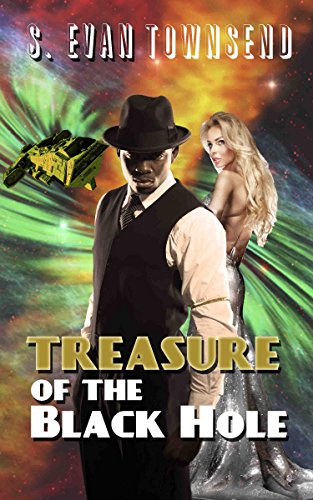 Treasure of the Black Hole is the first book in a series of three including Treasure of the Pirate Planet and Treasure of the Rogue Moon. I am planning a three-novel prequel series to that series. The first novel, Chumba of the Intelligence Corps: The Smugglers of Mars is in edits. The second book I've started writing the first draft. The third book is swirling around in my brain.

Those sound like a lot of fun! I can't wait for the new one to come out. What about you as a person? What do you do to relax? Favorite movies or tv shows? Hobbies?
My hobby is basically writing. I'm lucky that way. To relax I watch movies via Netflix disc service (dvd.com). I'm also a huge Jeopardy fan. I tried out for Jeopardy once in 1989. I didn't make it. I had to travel to Los Angeles to do that. Now they do it on line. I've tried twice and haven't made it. I guess I'm not smart enough.

I think you're just too smart for Jeopardy. What gets your creative juices going? Do you write to a music, and do you want to share your playlist?
I write to "Sound of the Fan" by Dell Computers

lol "All writers must have cats, especially if they write fantasy or speculative fiction." Do you have a stand on this one? Any cute pictures of your kitty or other pet? 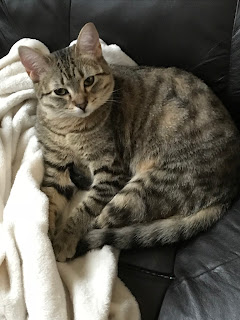 I don't think that's true. I never had a cat until September of 2017 when my son adopted a rescue cat from the shelter. Her name is Lily and she's a sweet but stubborn kitty.

What organizations do you recommend for those wanting to become writers? Any advice you'd like to share about writing?
I would recommend Toastmasters to anyone who wants to be a writer. It teaches you to speak in public with confidence and helps with interpersonal communication, something a lot of writers need help with. Also, see if you can hook up with a local writers' group for feedback, ideas, and camaraderie.

What writers inspired you to become an author?
Larry Niven, Robert A. Heinlein, and Poul Andersen

If you could travel to any time in history, when would you visit?
The 1960s. I was a kid in the '60s and I always felt as if I missed out on a lot of fun.

If you could have dinner with any of your characters, which ones would you choose? What food would you serve?
Titus Chumba, aka Rick Bailey, from Treasure of the Black Hole. He would have a lot of stories to tell about his time in the Intelligence Corps of the Core Empire and his time as a private detective on Hayek IV. I'd serve steak and baked potatoes with steamed spinach. Why? Because that's my favorite dinner. And Titus has never had real steak.

If you could travel anywhere, on earth or off, where would you go?
I would love to explore Europe: the fjords of Norway, the history (and wines and cars) of Italy, the autobahns of Germany, the architecture of Prague.

I'll come with you when you go. Describe your dream writing spot.
A little office with a view of water and mountains and great internet service.

Thanks so much for stopping by! Please go check out his books. They are worth a read!