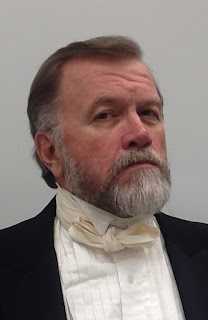 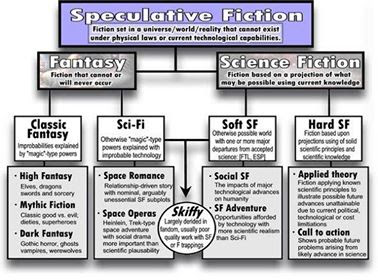 I find this graphic very useful in discussing the range of genres and sub-genres beneath the broad umbrella of “speculative fiction.”

I write speculative fiction across the entire range. The only sub-genres I haven’t written in (so far) are High Fantasy and Mythic Fantasy. One of the reasons I really like Hard SF, especially Call To Action, is that it often deals with pessimistic situations in an optimistic way, pointing the way out of pending problems through science. My recent Gold Quill-winning novel, Dragon Moon, is just such an adventure: the governments of the U.S. and the other participants in the space race of the ‘60s have, in actual fact, given up their lunar launch capabilities. But China is catching up and surpassing them. What might happen if the peaceful efforts of the ‘60s yield to the blandishments of world power? I am afraid that if we are not careful, we will soon find out. Dragon Moon is a call to action.

I am particularly proud of a call to action short story, another award winner, entitled Amahl. I was called upon, on very short notice, to write and perform a piece of horror. I do not read or—usually—write horror, and I chose to place my story in real-world horror: with a little boy in the rubble of a Syrian village.

My current WIP (Work In Progress) would most probably fit into the Mythic Fiction sub-genre, though I consider it more nearly a work of historical fiction. It is the origin story of a group of Book of Mormon youth known as “the stripling warriors.” In my version I assume that they are Meso-American, immersed in pre-classic Mayan culture. It’s a lot of fun fleshing out what little Mormons know about these kids with speculative details. 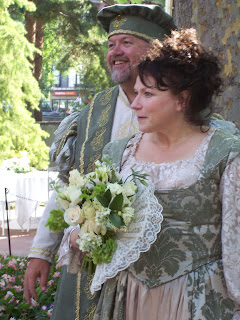 What about you as a person? What do you do to relax? Favorite movies or tv shows? Hobbies?
As my bio mentions, I sing opera at the professional level, with the Utah Opera Company. It is intensely pleasurable for me, so I count it as a hobby, but it is also a very time-consuming paying gig, so it is also pretty much a second job. I also have a BBQ catering business that dominates my summers, when neither the opera nor the middle school are in session.

Wow! Opera singing is awesome. What gets your creative juices going? Do you write to a music, and do you want to share your playlist?
I listen to a Pandora station called “Writer’s Trance,” which was put together by Orson Scott Card. Highly classical instrumental in nature.

"All writers must have cats, especially if they write fantasy or speculative fiction." Do you have a stand on this one? Any cute pictures of your kitty or other pet?
Yeah, I don’t buy this one. I don’t have a cat or any other pet, although I would probably wind up with a dog if either my wife or I were at home full time.

What organizations do you recommend for those wanting to become writers? Any advice you'd like to share about writing?
I am a huge fan of the League of Utah Writers. It is a collection of like-minded story-tellers, striving to buoy, educate, and sustain one another.

My advice on writing can be boiled down to an acronym: BIC/FOK: Butt In Chair/Fingers On Keyboard. If you want to be a story teller, you have to put in literally thousands of hours of BIC/FOK. You have to power past the point where it becomes an effort to make yourself do it, and just keep at it like the Energizer Bunny.

What writers inspired you to become an author?
Both my parents were writers, with varying degrees of success, mostly in non-fiction. They inspired me. But both of them also inculcated me with a true love of science fiction from the Golden Age. I literally learned to read on stories by Asimov, Bradbury, Clark, etc. 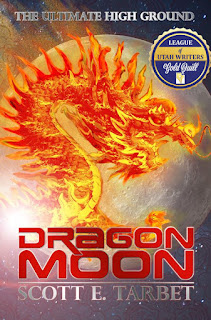 Any special appearances or events coming up that you want to mention?
I have been accepted into the upcoming Futurescapes writing workshop. I will also be signing at Fyrecon.

If you could travel to any time in history, when would you visit?
I would love to visit Cliveden, Buckinghamshire, when Sir Winston Churchill was a frequent guest and active antagonist of the hostess. Now that would be a dinner party to be remembered.

If you could have dinner with any of your characters, which ones would you choose? What food would you serve?
It is tempting to type “see above” for this question, since Sir Winston plays a prominent role in my novel, A Midsummer Night’s Steampunk (AMNS). But that was Winston the young lover, not Winston the politician.

If I could dine with any of my own characters it would be Dr. Lakshmi Malieux, the genius philanthropist of AMNS. I would be fascinated to put any number of questions to her. Since she is the daughter of the Maharaja of Golkondah, the fare would be vegetarian. 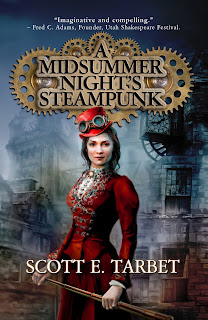 If you could travel anywhere, on earth or off, where would you go?
Tahiti Nui. I have been fascinated with the place since I first read Mutiny on the Bounty at about the age of ten. It’s on my bucket list to free dive there before I die.

What color would you wear if you had only one choice?
Black. Most of my wardrobe already is.

Describe your dream writing spot.
My office is so completely me that I cannot conceive of doing the bulk of my writing anywhere else. It is piled high with books, art, swords, costumes, hats, multiple large computer screens—the general detritus of an ADHD speculative fiction author’s life.

Thanks for stopping by!