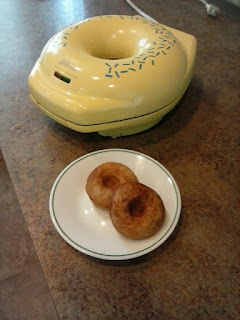 Yeah, that spelling bugs me, too, but these are not doughnuts—the light and fluffy yeast-raised rings of satisfaction. We get those at the local Mexican bakery, Viera's, because they are absolutely delicious and a normal doughnut is the size of my head. Very dangerous bakery for me to walk into. These are donuts. Made in a Sunbeam Donut Maker I picked up at Goodwill for $4. (Babycakes brand also makes one but I don't know how well it works because I bought the Sunbeam instead. It's shaped like a big yellow donut, with SPRINKLES! How could I pass that up?)

It was worth every penny. It works great for cooking cake batter, muffin batter, banana bread batter, and every other kind of batter I've tried, as long as it's thick. It only makes five at a time and they are always donut shaped, but it doesn't heat up my kitchen and it cooks really quickly.

We tried it with cake mix (make it the way the box says except use only half as much water so it is thick). I was not impressed. The flavor was just kind of bleh. I've been spoiled by cooking from scratch.

I tried a gluten-free brownie mix in the donut maker. I didn't taste one, they disappeared way too fast, but my husband and son (who ate them before they realized they were my daughter's) said they were really delicious. My daughter ate eight of them, so she approved, too.

I guess flavor depends on the mix. I haven't tried chocolate cake mix in it yet.

If you don't have a donut maker, bake these into muffins instead. Directions are included.

Heat up your donut maker until the green light comes on. Spoon batter into each hole. Close and cook, about 3-5 minutes. Remove carefully. Repeat with remaining batter.

Serve warm with cream cheese. Makes about 10-12 donuts in the Sunbeam cooker.