One Man's Junk is Another Man's Treasure

My husband has fallen in love with Goodwill. Don't get me wrong, we had thrift stores back in Utah. Deseret Industries, DI to the locals, is a great place to pick up bargains. But nothing like Goodwill here in Washington.

DI had clothes and appliances and furniture but it felt like everything there had already had at least five owners. Well-used didn't begin to cover most of what we found. The stores here have stuff that is much newer. And they have stuff that would have disappeared in minutes from DI's shelves. Or maybe it's just they have a different selection of stuff because the local donation pool is different. 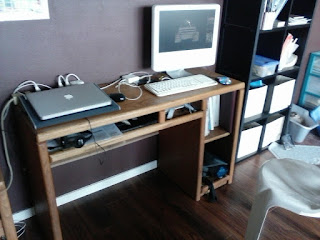 My hubby picked up an entertainment center and turned it into a desk for himself. It looks nice, too. He got a sewing machine, installed in a table, for cheap. The table is now holding his new saw. The sewing machine is in my sewing room waiting for me to plug it in and see how it works. I already have a functional sewing machine and a serger and an antique sewing machine, so that may take a while to happen.

I picked up a brand-new fondue set for my son to play with. I also found a waffle stick maker that had been used maybe once or twice. We had way too much fun making waffle sticks and eating them with ice cream and chocolate fondue. 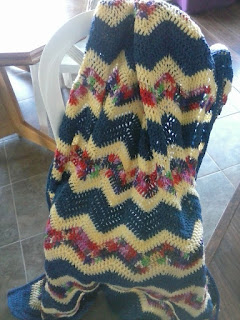 But my weakness at Goodwill is the yarn. I've bought way too much of it. My bins are stuffed clear full. Anyone want an afghan? It will be ugly, because that's my hubby's definition of crocheted afghans. And everyone needs an ugly afghan to make the couch feel like home.

Leave a comment or message me if you're interested. I sell them for pretty cheap. Just tell me what colors you want.