I've been catching up on reading the last few weeks, so I have book reviews for you. Some of the books are new, some are older. I'm not a professional reviewer. This is just my personal opinion of the books. 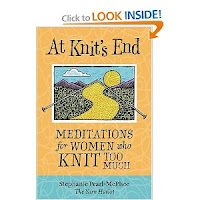 At Knit's End: Meditations for Women Who Knit Too Much, by Stephanie Pearl-McPhee, 2005

This is a fun little book, full of quotes and life observations. I don't knit, I couldn't if my life depended on it. I've tried. I do crochet and quilt, though, and all of her observations about knitting too much fit quilting and crocheting and other needle arts. I enjoyed reading snippets, laughing over most, crying over a few. Much of the book reminded me of Erma Bombeck's writings, except shorter. If you have closets full of yarn/fabric/art projects, this book is one for you. 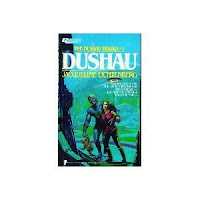 The Dushau live practically forever. The Allegiancy picks them as it's scapegoat when civilization begins to crumble. Human Krinata is caught between her admiration and love of the Dushau and her loyalty to her Emperor. Dushau starts off strong, with lots of interesting aliens and tense situations. Jacqueline says in her bio that she's a big fan of Andre Norton and her writing shows it. The book is reminiscent of Norton's works while still being very original. However, the story and characters bogged down about halfway through. The action slows to a standstill while the characters struggle with philosophical issues. I really wanted to love this book, but it just didn't deliver what the beginning promised. I still enjoyed it and the action does pick back up for the end. It's a solid read, an original science fiction adventure story with plenty of aliens and action. 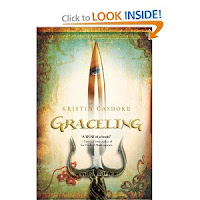 Katsa is Graced with killing, her uncle's pet assassin. Until she meets Prince Po and finds a better reason to live. I enjoyed Graceling. It's a marvelous coming-of-age story with unique characters and a riveting story set in a magical world. My only complaint about this book is it's anti-marriage message. I can understand why Katsa refuses to even consider marriage, it fits the character. But everyone else thinking marriage is bad? Nitpicky reason, but I can't give an overwhelming positive recommendation because of it. 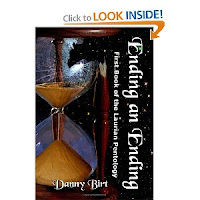 Ending an Ending, First Book of the Laurian Pentology, by Danny Birt, 2008

If you like epic fantasy, this series fits the bill. Sanct has no memory of who he is or where he came from. He possesses powers he shouldn't. The mysterious setup to this story had me intrigued but I found the writing style too distracting. I'm not a big fan of epic fantasies and this book didn't change my mind. However, if you like fantasies with different settings and new twists on the old quest stories, this fits the bill. If you like books that wrap with a neat ending, this one doesn't. The story doesn't resolve at the end of book one, it leaves you hanging. Danny has built a solid world, very believable, with engaging characters. As I said, if you enjoy multi-book fantasy quest epics, this is a good one. 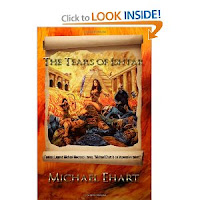 Based on Babylonian myth, this book tells the story of Ninshi. Her lover is held prisoner by the Manthycore, a beast that eats men. Ninshi must keep luring people for the Manthycore as she searches for a way to free herself and her lover from the curse. I enjoyed this sword and sorcery tale. The fights do become a bit repetitious, but I was engrossed in Ninshi's character enough that I wanted to know how she resolved things. She is on a quest to find the Tears of Ishtar, a set of rubies with magical powers that might be enough to free herself and her lover from the Manthycore. After hundreds of years wandering the land as its servant, Ninshi hates fighting, hates killing, but does it because she has no choice. Michael Ehart has created a very sympathetic and strong female warrior. 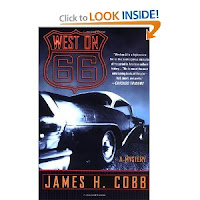 A mysterious young woman walks into the truck stop where off-duty police detective Kevin Pulaski has stopped for dinner. He senses something sinister to her request for a ride to St. Louis. Before he knows it, he's deeply involved in her flight from a life ruled by organized crime. Set in 1957, this murder mystery is a fast ride along old US Route 66 as Kevin and Lisette run for their lives from a gang of mobsters intent on revenge. It kept me turning pages, trying to find out what happens next and what happened years ago to Lisette and her family. James Cobb keeps the tension going all through the book.

As I said, it's a random sampler. These are the books I've read in the last month or so. I hope you find something to suit your tastes in the pile.