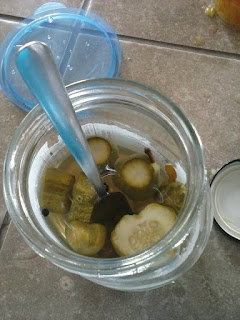 I have an old pickle recipe book. This summer, for the first time in my life, I successfully grew cucumbers. So, of course, I made pickles. Lots of pickles. I pickled not just cucumbers, but beans and okra and jalapeños and relishes. My kids keep looking in the cupboard and asking me if we have enough pickles yet.

I have some really great recipes, definite keepers for future reference. This is one of those. Yes, it really does take five days, but most of that time is sitting on the counter in brine. It only takes about ten minutes a day except for the first and last day.

If you like these crispy, make a small batch and don't bottle them. Pack them in a jar, stick them in the fridge, let them sit for a week, then enjoy the crispy deliciousness. Just eat them within a month or two. They still taste good if you process them and seal them, they just won't be as crispy.

And be warned - they are a powerful brined sweet pickle. Loads of good flavor. A little goes a long way with these pickles.

A word about cucumbers - pickling cucumbers are a different variety from the ones you buy in the grocery store. They are lighter green, smaller, and have lots more bumps. They are also not treated with a wax spray. Grow them yourself or buy them from a farmer's market if you can. If not, make sure you are getting untreated pickling cucumbers. They make much better pickles.

First Day, Morning - Slice off the stem end and blossom end of the cucumbers, discard. Slice the rest of the cucumber into thick slices. You should have about one quart of slices. Dump them into a large ceramic bowl. Plastic or metal bowls might react with the vinegar brine later. I have the best luck using a large ceramic mixing bowl for this. Next, mix the salt and the quart of water. Pour over the cucumber slices. Use a small stoneware plate or glass pie pan to weigh them down so they stay submerged in the salt water. Push the bowl to the back of the counter and let it sit for 36 hours.

Second Day, Evening - Drain the cucumber slices and discard salt water. Place cucumber slices in a large saucepan. Pour in one cup of the vinegar. Add just enough water to cover cucumbers. Cook over medium heat for 10-12 minutes, just simmering, DO NOT BOIL. Drain and discard the cooking liquid. Dump the cucumbers back into the ceramic bowl.
In the saucepan, mix 1 1/4 c. vinegar, 1/2 c. sugar, pickling spice, and 3/4 c. water. Bring to a boil. Pour over the cucumber slices. Let stand for 24 hours.

Fourth Day, Evening - Drain syrup into a saucepan. Heat to boiling. You can remove the whole spices if you want, I like to leave them in the brine.
Pack pickles into jars. Pour boiling syrup over the pickles just until covered. If not enough syrup, use vinegar to finish filling the jars.
Process to seal or refrigerate as soon as the jars cool down.

Makes about one quart of pickles.

Whole Pickling Spice is a blend of spices. I like to make my own and keep it in the cupboard. If you don't want do buy the mix or want to try your own, this is what I use for just this recipe:
1/2 of one bay leaf
10 whole peppercorns
8 whole cloves

All mixed, it should be less than one tablespoon.