Cooking adventures continue at our house. Instead of Santa bringing granola bars, cold cereal, and pop tarts for breakfast, we decided to save him the chore and make waffles Christmas morning. I woke up too sick to do it, so my hubby and boys stepped in. 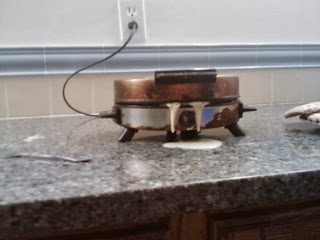 They were tasty and it was a fun start to the morning.

We like to top our waffles with just about anything and everything sweet - yogurt, marshmallows, chocolate syrup, pancake syrup, fruit syrup, fruit salad, pudding, ice cream, pie fillings - you name it and we'll slap it on top of a waffle.

My family used to have huge sourdough waffle parties. It would start several days before when my dad would pull the grody sourdough starter from the fridge and start feeding it. The stuff grew and grew and grew and smelled all sorts of nasty as it fermented and bubbled in the crock. On the day of the party, he'd mix in the rest of the ingredients. And then we'd start cooking waffles. Even with three waffle irons going, it took hours to cook all the dough. We made hundreds of waffles. And topped them with everything under the sun. Good times.

This isn't a sourdough recipe, but it's a good one. It takes a bit of work and makes quite a few dirty dishes, but waffles are worth it.

By the way, that waffle iron in the picture was a wedding present - almost 28 years of waffle-y goodness. They just don't make them like that anymore.

Mix flour, baking powder, baking soda, and salt in a large mixing bowl. Set aside.
Mix milk, melted butter, and egg yolks in another mixing bowl. Set aside.
Whip egg whites in a third mixing bowl until very light and fluffy. Set aside.
Heat waffle iron, spray with spray stuff or oil or whatever it is you do with yours. Mix dry ingredients with milk mixture. Stir just until lumps are mostly gone. Fold in egg whites very gently. You want to keep the fluffiness as much as possible.
Spoon into waffle iron and cook according to the directions for your waffle iron. Serve with toppings.