The dog ate my essay. Cross my heart.

I had a great post all planned on the differences between Romance and Other Genres. It's still waiting for me to write it. The weekend turned into a lot more work than I planned.

Two weeks ago, my 18yo daughter brought home a giant hairball of a dog. Wookie is a chow-lab mix, as close as we can figure. He has a calm, sweet personality with a big stubborn streak. He also doesn't smell much like a dog. He's the perfect pet for my daughter. I'm not a dog person. I've never been one. Wookie convinced me that there are dogs I can live with. So, when she moved to another city last Saturday, I was prepared to get our family a dog.

Friday, we took our two youngest to the animal shelter to look at dogs. My 10yo son threw a massive fit. He did NOT want a dog in our house. He hates dogs. He tolerates them when we're housesitting, but he did not want one to move in permanently. He got overruled. We found the sweetest little black lab. Sasha is very quiet, polite, and gentle. She's the perfect dog for us. 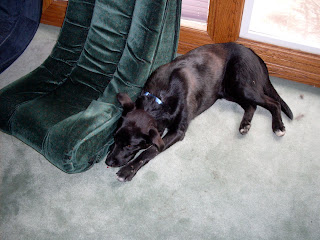 The 10yo got so upset, he stole all the pillows off my bed and hid them. He threw a tantrum of massive proportions, at least for him. After a long discussion, we agreed that he could have the cat he fell in love with at the shelter if he would tolerate the dog. We now have a massive cat named Chunkalicious Rex. The picture does not do justice to the size of this beast. He's a big pansy, though, very friendly and sweet. 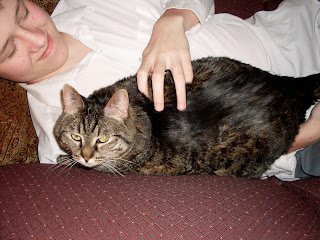 Saturday afternoon I spent mediating between the kids, the dog, Chunkalicious, and our geriatric toothless cat who's been in our house for over 15 years. It was quite the day. So nothing I planned for the weekend actually happened. I'm sure you wanted to know all that. Next week, I'll write that article about writing romance versus writing science fiction. Promise. Unless something else explodes in my life.