First off, some of these were given to me free by the authors. Others I found for free. A few I bought. None of these were acquired for the purpose of reviewing. I got them because they sounded like good reads. And they were, or I wouldn't be reviewing them. My whole reason for reviewing books is to share books I enjoyed with you. It's all my opinion, of course.

No rockets, no aliens, no magic, no alternate reality, Rebel Spurs is the story of Drew Rennie after the American Civil War. He drifts west, looking for a place to belong and a future. His belongings include two beautiful horses and a letter proving who he is. His father, that he's never met, owns a spread in Arizona beset by Apache raiders, a band of rogue Confederate troops, and a wild stallion that kills his rivals.

With a few broad strokes of her pen, Andre Norton paints a vivid landscape of the American Southwest in the 1860s. She has a gift of words that shines in this novel. Action and suspicion and betrayal, all great themes of any good story, all are present in Rebel Spurs as Drew wrestles with his future and whether to reveal his identity to his father.

This is the sequel to Ride Proud, Rebel. I didn't realize it until I'd already gotten involved in the story. I'm halfway through Ride Proud and enjoying it just as much. I'm not one for westerns, but these are Andre Norton westerns. I love her stories, her characters, everything about these books. I found both free for download through Stanza on my iPod.

The Watchers from Within Moments, by Mark Paul Jacobs
Smashwords, $0.99 https://www.smashwords.com/books/view/12501
Short story (10k words)
Jim Vedder, chief engineer at California’s FastTech Corporation, has developed the world’s fastest camera. But exploring the bizarre universe of the super fast, soon uncovers horrific entities that captivate the world’s consciousness. And FastTech is quickly, and somewhat unwillingly drawn into a quagmire of politics, fate, and the unforgiving press.

Creepy and shivery, this story left me huddled under the blankets. If you like sunshine and happy flower stories, don't read this one. If you want something to leave you thinking and wondering what is really between moments of reality, and you don't mind being scared and a bit depressed by the ending, read this story. Mark is one of my friends I ran into on BestsellerBound, a great forum for writers and readers and anyone who enjoys discussing writing and reading. He has a gift for twisting words into stories and leaving images in my head. Well worth the ninety-nine cents.

I reviewed his short story, Incident at Walter's Creek, not long ago. Fun scary story, too, although lighter in tone than this one. 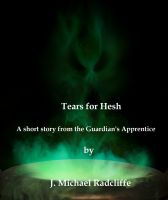 Set in the world of The Guardian's Apprentice, this is the story of Hesh, a young man who works for a conniving, power-hungry wizard who will stop at nothing to get what he wants. Hesh is a gentle giant, towering above others, but soft spoken and afflicted with a stammer when he gets nervous. Sent on an errand for his master, he uncovers a terrible secret and must face the consequences.

Okay, another creepy one but with a different tone than the other two. This one deals with magic and a ruthless wizard who will keep his secrets no matter the cost--to others. I enjoyed the story enough that I am going to have to buy The Guardian's Apprentice, the novel that explains more about the world and the wizards. Michael is another friend from BestsellerBound. You really should check them out here: http://quietfurybooks.com/messageboard/index.php 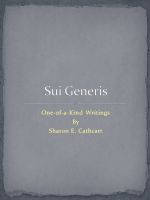 Author Sharon E. Cathcart ("In The Eye of The Beholder," "Les Pensees Dangereuses") presents a sampler of essays and short fiction. The collection features "Heart of Stone," a short story never previously published.

The first part of this collection are several essays written by Sharon. She expresses her opinions beautifully. Though I may not agree with her political or moral stance, I appreciate her viewpoint and her clarity of vision. She writes without rancor or hatred, a voice of love and tolerance that is needed in our world. If we could all discuss things as she does, we would not have the outrage and anger that marks so many of our political "debates". Even when we don't agree, we can show respect for each other.

The second half of her collection are short stories. I love Heart of Stone. The second story is just as romantic but a lot more cynical in tone.

Try Sharon's writings. You won't regret the time spent with her. And yes, you can find her on BestsellerBound, too.