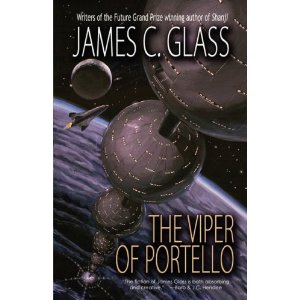 I enjoyed The Viper of Portello. It mixes political intrigue, military action, and family relationships to create a fast-paced ride. Set in the future, sometime after other planets have been colonized, the government of Nova Brazilia has become corrupt. Revolutionaries are set to overthrow the governor. The League military is poised to invade and restore order. Everything rests on the decisions and actions of one man: Eduardo Cabral, sometimes called Culebra, or the Viper of Portello.

The book isn't your typical save-the-galaxy space opera. Though full of action sequences, the main focus is on the characters. Choices affect who we become. Sometimes the choice is forced by circumstances, but how we react says more about who we are than what we've done. Jim Glass takes us inside the heads of the people of Nova Brazilia as their world begins to crumble. It's a well-written and enjoyable story with characters I won't soon forget.

And Jim Glass is a very nice person. I met him at SpoCon last August. He's still upset over what the government did to NASA and manned space travel. I'm sure if you ask, he'll be happy to share his opinions.