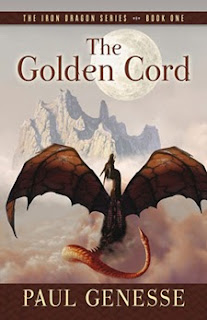 I met Paul Genesse two and a half years ago at a local convention. I was dithering about submitting at the time. I had a manuscript that I believed in, but the established authors at the con all had the same message: Don't bother. Publishing fiction is hard and very few succeed. Very discouraging for a fledgling author to hear. It didn't help that I was clueless about submissions or pitching a book or anything else other than writing. I was ready to stick the manuscript in a folder and forget it. Until Paul talked me out of it.

He spent several hours with me, giving me the advice and encouragement that I needed. My novel, Nexus Point, is in print mostly because of that pep talk. I'll buy all of Paul's books just for that reason. He's a genuinely nice guy with a passion for storytelling.

The Golden Cord is the first in a series. I'm not much of a fan of epic fantasy, especially when the main character is an angsty teen/young adult and the world is a dark, gritty place where everything wants to either kill you, eat you, or both. This book fits solidly in that category. I still enjoyed it.

Paul builds a world that is fully believable. Danger lurks behind every tree, if not in the tree or on the tree or *is* the tree. Not a world I'd want to live in. His main character, Drake Bloodstone, is a troubled young man. He's also loyal and tormented by his need to keep everyone in his village safe. He failed to protect his friend years ago and the failure haunts his every thought. His quest, in this book, is a reluctant choice to save the world in order to save his village. Or so he thinks. It's as much about saving his own soul and letting go of the past as it is about present dangers.

The Golden Cord is a solid book. I could hear Paul's voice in the words, his passion and excitement over the story spilling into each scene. I can't honestly say it's one of my favorites, but it's a good read, one I'd recommend to anyone looking for a fantasy quest novel that isn't your usual Tolkein clone.

Want to hear why it took me two years to finally read the book? Sure you do. It was in the short pile of Books-to-be-read-very-soon (as opposed to the books-to-read-sometime-in-the-next-decade pile, both are much too tall). Of course, that meant it was in plain sight of my children and my husband. I went to read it one night and couldn't find it in the pile. I found it in my husband's hands. So I waited for him to finish. Then one of my boys discovered the book. After chasing it back out of three different bedrooms, I have multiple children who read any book that looks good especially if it's in my pile next to my bed, I finally got my hands on it last spring. Between work, my own writing deadlines, and life in general, it took me several weeks to start reading it. I was just getting into the story when I left the book in a motel room in Lewiston ID. I hope they enjoyed it because they never admitted to finding the book even after multiple phone calls. I bought another copy a few weeks ago and threatened everyone in the house not to touch it until after I'd finished it. It was worth it. I wish I'd dragged it out of those bedrooms a long time ago or threatened my kids with horrible punishments, like doing the dishes, if they touched it before I read it.

Now, where did I put book two? The Dragon Hunters continues the quest and if I can find the book, I'll read it. It's in someone's pile at my house...