Let's welcome author Krystal Brookes to the Far Edge of Normal. When Krystal Brookes isn’t enjoying staring at the beautiful scenery of her Scottish home, she’s writing about what’s under hunky Highlanders’ kilts, feeding her nieces too many sweets then taking them home, and drinking way too much coffee.

She started out writing Star Trek fan fiction but has recently progressed to original stories for publication. She writes contemporary Scottish romance and science fiction romance. When the wet dreary weather in Scotland gets too much, she dreams of taking off in a spaceship to find warmer climes. Who wants to go to a sunny country when you can head for a sunny planet?

Tell us about your writing - What genre do you prefer to write? What books, stories, other publications that you've written are your personal favorites? Anything new coming up?
I write sci fi romance and contemporary romance and am dabbling in paranormal. I write mainly m/f but have also dabbled in f/f and menage. I only have 3 works published so far and they all have a place in my heart. Bounty was published first, Highland Fling was second and was the type of book I wanted to write when I was young (though I probably didn't imagine so much sex in it, lol) and Fan Girl and the Geek is a kind of fantasy autobiography for me.

What about you as a person? What do you do to relax? Favorite movies or tv shows? Hobbies?
I'm quick to anger but equally as quick to apologise and try to move on. I love social networking to relax. I love Downton Abbey, Castle, Star Trek Voyager, West Wing and Firefly.  I do have a major crush on Nathan Fillion

What gets your creative juices going? Do you write to a music, and do you want to share your playlist?
i like to listen to internet radio channels that play modern country. It's tuneful and easy to listen to and I love a lot of modern country acts like Brad Paisley and Carrie Underwood

"All writers must have cats, especially if they write fantasy or speculative fiction." Do you have a stand on this one? Any cute pictures of your kitty or other pet?
I have no pets. I don't have an appropriate lifestyle to keep a pet. I'm also much more a dog person than a cat person. I'll stick with the giant spiders for now.

What writers inspired you to become an author?
Probably the authors I enjoyed when I was young. - Enid Blyton, Francine Pascale, Christine Marion Fraser

Any special appearances or events coming up that you want to mention?
Highland Haven, the second Kilrigh Heat series book is due out on 18th October.

If you could travel to any time in history, when would you visit?
Ancient Greece, I think. They were terribly civilised. Besides, I studied New Testament Greek at college so I think I would pick up the language pretty quickly.

If you could have dinner with any of your characters, which ones would you choose? What food would you serve?
Any of my heroes. They are all babes. For some reason my heroes always make French toast.  I would make chicken stuffed with haggis in a cream and mustard sauce. It's the fanciest thing I know how to make.

If you could travel anywhere, on earth or off, where would you go?
The nearest planet with intelligent life. There has to be intelligent life out there in this vast universe.

What color would you wear if you had only one choice?
Purple. 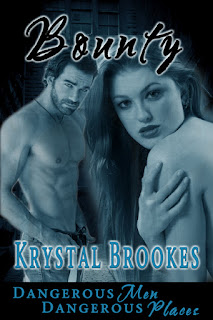 Describe your dream writing spot.
A beach in the summer, with a cool breeze wafting off the sea, dogs barking along the shoreline and guys with these little beach windsurfing things going by (hopefully with few clothes on and great abs.)

All books available on Amazon (UK and US), Barnes and Noble, Smashwords, Bookstrand, CoffeeTime Romance and Allromanceebooks.

Blurb for Bounty
When Gemma Scott’s shuttle crash lands on Alcatraz prison planet, she’s sure of one thing. If the impact doesn’t kill her, the inmates will. She wakes up in the hut of a convicted terrorist and wonders how long it will be until the handsome but dangerous man finds she was the one who arrested him two years earlier. As their attraction grows, they work together to help Gemma escape the dangerous planet. But they can’t deny the sparks that fly between them.

Excerpt
“I see you’re awake,” a gruff male voice stated.
Gemma looked in the direction of the voice. Wherever she was, it was dark and damp smelling. Her mind was struggling to make sense of what had happened. She could tell there had been an accident but the immediate events before it were extremely fuzzy.
“Where...?”
“It doesn’t matter. You’re safe–for now. How are you feeling?”
“Sore and groggy,” she replied quietly.
She couldn’t quite make out the man in the dim light. She didn’t recognize his voice or where she was. Her memory was still fuzzy but something in the back of her mind scared her. She seemed to be alone with this man and she certainly was not in a hospital.
“Yeah, well, that’s what happens when you crash land your shuttle into a planet Ms. Scott.”
“How do you know my name?”
“Your ID was in your pocket. And your phase gun was in your holster.”
“Where is my gun now?” Gemma asked, trying to stop the fear in her voice.
“It’s safe.” The man moved forward into the thin shaft of light coming from the dim overhead light on the ceiling of the hut they seemed to be in. The man was tall, muscular and tanned, with a shock of medium length brown hair. She recognized him, but couldn’t quite recall from where.
“I’d prefer it if you returned my gun. I need it.”
“I said it’s safe.”
She sat for a few moments trying to remember what had happened. She knew she had to get her gun back from this man but her head was too befuddled to form a coherent argument for now.
As the details of the accident came back to her, she squinted again at her rescuer, trying to recall how she knew him. She felt her blood drain as she remembered.
“I need to fix my shuttle,” said Gemma, hoping that he hadn’t realized who she was.
“It’s dark outside, you won’t be able to do anything just now.”
She tried to sit up but a shard of intense pain ripped through her shoulder and made her fall back on the pillow.
“You dislocated your shoulder, so I had to put it back in the socket. It’s going to be sore for a while.”
She rubbed her shoulder and grimaced.
“Thanks, I think.”
“If I’d left you in that shuttle, believe me, you would have been murdered or worse.”
“What’s worse than being murdered?”
“On this planet? Not being murdered and being kept alive long enough to be aware of what they’re doing to you.”
She shuddered.
“Thank you for not leaving me. I heard them banging on the shuttle hull. How did you get rid of them?”
“I have a reputation around here. Apparently I can rip a man’s throat out with my teeth.”
“Oh!” She wasn’t sure she wanted to hear any more. The man smiled wolfishly at her.
“Don’t worry, Gemma. I’m not hungry just now.”
She did her best not to show her fear. Not having her phase pistol was a problem. She always felt braver on the other end of the cold slender metal tool.
“Umm, what’s your name?”
“Rob. Rob Paris.”
His name triggered the memory that she had buried under a hundred other missions. He was a terrorist and she had hunted him for weeks before he had turned up on an abandoned planet on the edge of Terran space. She’d stunned him and kept him unconscious as she had transported him on her shuttle back to Earth to face trial. She wondered if he would remember her. She’d shot him from behind, so with a bit of luck, he hadn’t made the connection.
“Pleased to meet you. Are you a prisoner here?”
“What do you think?” he drawled.
“Well, I assumed but...”
“But what?”
“Never mind. Can I get my pistol please?”
“I said I was keeping it safe.”
“That’s very kind of you but I’d prefer to have it, if it’s all the same to you.”
Rob walked over and sat on the bed. He clasped her chin roughly in his hand and moved her head back, peering into her eyes. He let go as suddenly as he had grabbed her.
“Hmph! You’re definitely slightly concussed. As for your pistol; you’re in no shape to be carrying a fire arm. If any of those brutes came in here, you’d never be able to get it out the holster quick enough to kill them.”
“I always have my pistol set to stun.”
“I noticed.”
“You noticed?”
“Well, I noticed it was set to stun when I took it from you.” Gemma looked hard at him. Did he know? His gaze was unwavering and she was having difficulty reading him.
Gritting her teeth, she swung her legs out of the bed. Her shoulder was agony. Only then did she realize that she was wearing nothing but her bra and panties.
“Where are my clothes?”