I met Gene Doucette about a year ago on Twitter. I've followed his journey to publication with interest and sympathy. I've been there, too, and not long ago. So, let me introduce you to the author of "Immortal", Gene Doucette.

How can we find you? Website, blog, Facebook, Twitter?
All of the above.  The website is http://genedoucette.me, which is also my blog.  I’m on Facebook and Twitter as Gene Doucette and @GeneDoucette.  (I’m not one for handles.)  My main character is also on Facebook as Adam Immortal and on Twitter as @adamtheimmortal.  And just for fun, you can also find me on Goodreads (as Gene Doucette, of course) and I’m even listed on IMDb. 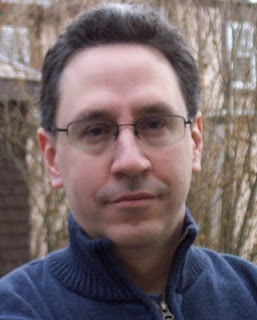 I'm just as creative with handles. Name recognition is where it's at. What do you currently have in print and where can we find them?
Immortal is the big one.  You can find that for sale in print on Amazon, and in ebook everywhere, more or less: Kindle, iBooks, Nook, Kobo, Smashwords… it’s even on sites I just learned existed, like Diesel.  I also have a few humor books out: Beating Up Daddy, which is in print only, you can find at Amazon.  Vacations and Other Errors In Judgment is an ebook on the Kindle.  And there’s The OTHER Worst Case Scenario Survival Handbook: A Parody.  You can find the original version of that in print from most online retailers and the anniversary edition I just put out on the Kindle a few weeks ago.

I'm looking forward to reading those, when I have money in my book budget again. What genre do you write?
I write serio-comic historical fiction crime/noir drama sci-fi fantasy action/adventure novels. 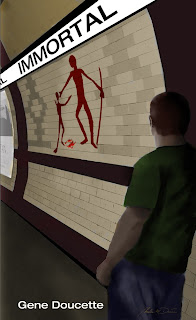 I asked Christopher Moore once what I could possibly call Immortal, seeing as how his novels face a similar problem.  He suggested I call it contemporary fantasy and get on with my life.  But it is not simply a fantasy, even though that’s the shelf it ends up on.  I have another novel called Fixer (sale pending, or maybe “pending”) that uses much of the same techniques as Immortal, but which would fit much more firmly on a science fiction bookshelf.  I think the most conventional book I’ve written was Charlatan, (book unsold; screenplay is award-winner though) which is a thriller.

Do the genre mash-up. Everyone else is. The only people who really worry about genre are authors, publishers, and booksellers. Or do readers really worry about genre?
Do you have cats or other pets? Why or why not?
We have three cats and a dog.  As I write this, the oldest of those cats is trying to get comfortable while sitting on my wrists and stomach.  I’m thinking of renaming him Handcuffs.  The other two cats are Wrecking Ball and Satan, although those aren’t their names either.  Our overweight dog, Penny (her actual name) is thankfully not attempting to get on my lap right now.  We’re pretty sure she thinks she’s a cat.

What inspires your stories?
I don’t know, but that’s the point of inspiration, isn’t it?  It sort of comes out of nowhere.

I read a lot of non-fiction—I’d say I read five non-fiction books for every one novel—which means I tend to go around with a lot of useless facts in my head.  Sometimes those facts gather together in one place and form a what-if, and then I sit down to try and figure out the consequences of that what-if.  If the consequences are interesting, I start writing.  Sometimes I don’t get very far because it didn’t end up being as interesting as I had thought it would be.  Sometimes I finish a novel.

That process sounds very familiar. I do similar things with my ideas. I won't admit how many starts to novels are sitting on my hard drive. What is your current WIP?
I’m still trying to iron out the kinks in Hellenic Immortal, the follow-up to Immortal.  It’s nearly there.  Then I have to wait for the things in my head to line up and point me the way through the third Immortal book.  And somewhere in there I need to rewrite Fixer, which I finished a while ago but which needs to be beaten and tossed around the room a few more times.  I’m also involved in a short film project that threatens to take up all of my time suddenly and without warning.

Ah, the joys of editing and rewriting. Good luck. What hobbies do you have that you want to share?
I wish I had time for hobbies.  What I have is work, writing, cooking, housework, and exercise.  I suppose you could call cycling a hobby, but I’m just using it as a means to commute to my job.  And I might not be able to do that much longer as my office just moved from 4.2 miles away to 18.5 miles away.

Did you always want to be an author? Who inspired you?
I decided I was going to be a writer about ten minutes after I learned how to read.  Or something like that.  I don’t remember a time when I didn’t define myself as one.  So in terms of inspiration it’s possible Shel Silverstein was responsible.

What are your favorite movies, tv shows, or books to read? Is there one that you could watch/read over and over without ever tiring of it?
I don’t have a “type” of movie or TV show I adhere to, i.e., I don’t just watch films where dudes blow stuff up, or only TV shows were dudes solve crimes.

Since I’m also a screenwriter, I really need a film or television show that’s written well enough to keep me guessing.  This is nearly impossible with TV; I’m usually calling out plot points two to twenty minutes before they happen.  Unfortunately this means I’m usually most interested in shows that the fewest people are also watching.  I thought Terriers was the most brilliant thing to come out this season, and it was canceled.

Movies can surprise me more easily.  I thought Black Swan was utterly devastating; I was completely lost in the film, and that’s a rare and great thing.

Books: I read mostly non-fiction, because aside from humor I hardly write non-fiction.  I cannot both read fiction and write fiction, so I have to make time for reading when I’m not also writing

What characters are your favorites from your books? From any work of fiction?
From my own books, Adam is an obvious choice.  He’s much more entertaining than I am.  I don’t know that I’ve ever become singularly fixated on major characters from other works, although I do recall a great fondness for Eliza from The Baroque Cycle.

If you could time travel, what is one event you would want to see in person, either future or past?
I sort of am time traveling when I write Immortal. Immortal is very much about imagining the past as it might have actually been, rather than how we generally depict it; we tend to romanticize or otherwise ignore certain realities.  For instance, most kings toured their lands for about six months out of the year, not just because it was something kings did but because the castles they called home were typically unlivable for long periods… because they had no indoor plumbing.  They traveled the land, in other words, because they and their fifty person entourage needed a place to take a dump.  I love things like that, even if it makes Ren Faire gatherings about as sensible to me as Civil War re-enactments where the South wins.

Romanticizing the past is the only way to want to live it. Medieval times weren't as nice as people want to believe. Thanks for stopping by, Gene, and good luck with Immortal! Check out his blog for other stops on the tour and thanks for reading.