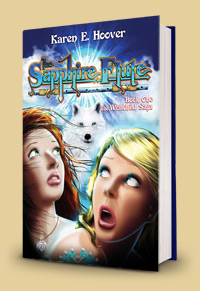 The Sapphire Flute is the story of two young women who find their destiny the hard way. It's magic and save-the-world high fantasy with plenty of evil to go around. For Ember, it's a search for her father and her own magical gifts. For Kayla, it starts with guardianship of the magical Sapphire Flute. She itches to play the beautiful instrument but has promised not to. Ember's insistence on attending the mage trials leads to her kidnapping by agents of C'Tan, her aunt who wants the child dead. Kayla can't resist just blowing into the flute, enough to activate its magic and bring her to the attention of C'Tan herself, who wants the flute's magic for her own.

I enjoyed the book. I've read a lot of high fantasy. Though the world is not that different from many fantasies, Karen's twist on the quest story was unique. Her young women are women first. Many fantasies feature male protagonists and questers. Women usually play a secondary role. If they join the quest, they are hardened warriors with little femininity. Karen's girls aren't that way. Kayla is as frilly and sweet as they come. Ember is more of a tomboy, but still very much female. C'Tan, the evil witch of the story, is very feminine, too. The change was refreshing, although it made for some interesting dilemmas. Girls and women aren't the ones who long for quests, not the same way boys do. Karen manages to pull very believable motivations from her characters.

My only complaint is that the characters are supposed to be 16 and 17. They read more like 11 and 13, but it still works.

If you have a girl age 10+ who likes fantasy, magic, and save-the-world quests, this one is a winner. I give The Sapphire Flute a solid 4 stars. I'm also looking forward to the next book in the series, which says a lot for the story.

Thanks for sharing, Karen! And for those who care, I met Karen at a book signing and we traded books.