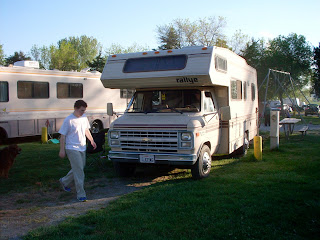 It's time for another adventure with Harvey the RV! It got off to a rocky start.

"We need to go somewhere," my husband announced on Sunday afternoon. "We can go this weekend."

I looked at a full calendar for the week. "Are you sure? Look at everything we have scheduled this week. We'll be exhausted by Friday."

"Okay, where are we going?" Sometimes it's easier to just accept than to try to fight. "Somewhere close since we can only go for one night."

We argued back and forth, consulted Google maps and paper maps, argued some more, and finally decided that Capital Reef would be nice. But it's about a four hour drive. 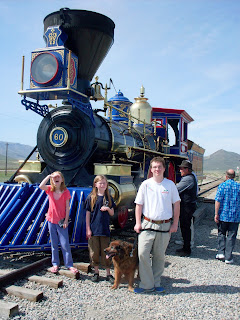 We argued again and finally decided we'd go to Promontory Point where the Union Pacific and the Central Pacific Railroads met 144 years ago. But there weren't any camping facilities close. So back to the maps we went. We picked Crystal Hot Springs in Honeyville UT.

So Friday afternoon, we picked up the kids from school, threw some stuff into Harvey, and took off. We weren't even out of the driveway before I heard, "Are we there yet?"

We made it less than a mile before the first fight broke out. Traveling with children is so much fun. And we only had three with us this time.

Crystal Hot Springs is a nice campground, although we picked the wrong weekend. We shared it with three LDS Wards' Father & Sons campouts, at least three Boy Scout Troops, and lots of normal tourists. We got a lovely RV spot right next to the swingset/sandbox and the restrooms. Let's just say it wasn't very quiet or peaceful.

Our dogs had fits about being on a leash the WHOLE TIME. They're used to running free. I forgot half the food. Taco stacks with no taco seasoning or salsa aren't nearly as tasty. My 16yo son slept in the bed over the cab. Every time he rolled over, we got an RV-quake. 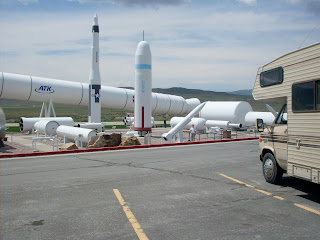 We picked the right weekend for the Golden Spike National Monument. We got to travel back in time to May 10, 1869, when the last spike was driven in the railroad line connecting east and west. The re-enactment actors did a great job.

Then we got to travel to the future. ATK-Thiokol has a rocket display out in front of their facilities. They also have the most effective deterrent I've ever encountered. Teeny tiny black gnats that fly into your ears and hair and make your whole head itch. They are the spawn of Satan. I only lasted ten minutes. I love rockets but not even rocket motors and shuttle boosters could win over the gnats.

Memorable quotes from the trip:
"Don't put rocks on the dog."
"No, Wookie, you can't pee on the Clunker rocket engine."