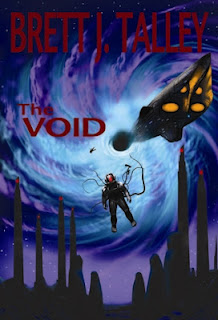 I don't usually read horror. I indulge in the occasional bad monster movie or classic Poe or A.A. Merritt tale, but not the freaky scary horror. But my new publisher, Journalstone, publishes mainly horror. (My books aren't horror, they're SF; just FYI) This is one of their new titles, coming in July. I read the blurb and thought it sounded interesting. I got an ARC (advanced reader copy) for review. Now that you've heard my whole saga of why I read this book, let's move on to the review.

The Void is a great science fiction novel, with some creepy horror bits. Or you could call it a horror novel with lots of science fiction. It's not a monster alien attack story, it's more suspense. Interstellar travel triggers dreams in those who travel. If they try to stay awake, they go insane. But the dreams are much more sinister than anyone realizes.

If you're looking for a great suspense story with plenty of drama and action, pick this one up. You won't regret it. This is Brett Talley's second novel. His first was nominated for a Stoker award. He's good.

I give this one 4.5 stars and a PG rating (no language, no steamy bedroom scenes, but plenty of creepy scariness.)

I was wandering through my local library a few weeks ago, and found their crochet pattern books. I enjoy crocheting. It's something I can do when I'm tired and watching tv and too lazy to do anything else. My only problem is that I have no patience for long-term or large projects. I want something I can finish quickly. This book was perfect. Blocks don't take long to make. Get enough of them finished, and you can sew them into an afghan. Ta-da! Large project completed. I was thinking of making up a bunch of these squares using cotton yarn. Two sewn back-to-back would make a nice hot pad. One could be a nice facial scrubber. Or you could sew four together to make a pillow top. Or doilies. Or doll blankets...

The instructions were clear and easy to follow. I give this one 5 stars. Ages: anyone who wants to crochet 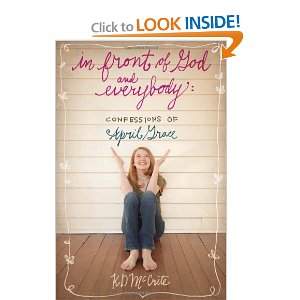 In Front of God and Everybody: Confessions of April Grace; K. D. McCrite


I bought this book for my daughter's ninth birthday, and to support my friend and fellow author, Katie. It was a little too old for my daughter, mostly because she isn't quite ready to read at this level.

April Grace is eleven and starting summer vacation. Her family lives in the Ozarks on a farm, which is just fine with April Grace. When the new neighbors stop by for directions, April Grace finds them stuck-up and rude. They're city folk with no appreciation of the country.

This book is hilarious, especially the dinner scene. Set in the 1980s, it brought back a lot of memories for me. Not that I was ever accused of being an Ozark hillbilly or that I ever had an older sister with delusions of glamor or that I ever had a feud with impossible neighbors...

I give this book 4.5 stars, rated G, recommended for ages 10+, especially girls who wonder how they are ever going to fit in. 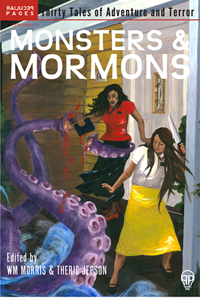 
Disclaimer: I'm one of the authors in this collection.

Back in the days of pulp fiction, Mormon settlers were easy villains to add to stories. Turn it upside down. Let the Mormons be the heroes and give them some great monsters to fight, then see where the authors take the stories.

This collection has a wide variety of stories, everything from monster slasher horror, to suspense, to science fiction, to sweet romance, to humor. It's a great look into Mormon culture. Don't expect doctrine, just a lot of good entertainment, 500 pages worth.

My two favorite stories are Other Duties by Nathan Shumate (a new bishop finds out about the duties in the top secret handbook) and The Other Wife by Emily Milner (a woman who can see ghosts marries and finds out about her husband's previous two wives).

I give this one 4.5 stars, rated PG mostly for violence and scary monsters.


(I've reviewed A Moth in Darkness before, but I'm including it here because it is book 1 of the trilogy)

The Fly in Paradise, Spiders from Memory; Frances Pauli

Fly and Spiders finish off the story started in Moth. Liz Larson and her friends opened the gates between our world and the Fey world. Now, a decade later, she's no longer part of it. Until people start to go missing and things unravel between the worlds.

This is urban fantasy with a great twist. No vampires or other undead, just elves and fairies and a twisted mystery with consequences greater than anyone imagined. If you're looking for suspense and intrigue and fantasy with a dose of romance, these are great books. And the kelpie? I don't want to ever meet one of those, even in broad daylight.

I give this trilogy 5 stars, PG rating.