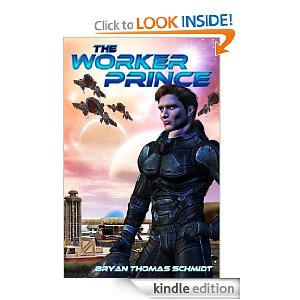 Davi begins life as a worker child, born to slaves and condemned to a life working where and when he's ordered. For the most part, the high tech society gives the workers a fairly good standard of living, but Lord Xalivar hates the workers and doesn't trust them to keep in their place. They want freedom for themselves and their children. Xalivar decrees all first-born sons of worker slaves will be sacrificed to his gods. Davi's parents steal a courier ship and outfit it for their infant son. They send him off by himself as the troops close in.

Davi is found and raised by Xalivar's sister. He's a prince of the realm and Xalivar's heir-apparent. Until he and Xalivar learn the truth of his heritage. Davi runs away to join the growing worker rebellion. Xalivar's love for his adopted nephew turns to hate and bitterness as they face each other as opponents.

If the story sounds a lot like the story of Moses and the Israelites against Pharoah and the Egyptians, it is. Schmidt has done a great job rewriting the historical tale into a science fiction adventure. He weaves a story of family ties, aggression, power, and love. Davi has everything - money, power, position - and he throws it away when he learns the truth of where he comes from and how his biological people are treated by his adopted family. If you're looking for characters with honor and integrity, who face tough choices with no clear answers, this is the book to read. I'm looking forward to book two and more of Davi's story.