Yesterday was a desperate day. My fridge is empty partly because I'm lazy and don't want to go to the store, partly because I've been too busy to go shopping, and partly because the day I set aside for shopping I ended up being sick. Not just sick of work and kids and my house, but lie-on-the-couch-barely-able-to-push-buttons-on-the-remote sick. So when late afternoon rolled around, I knew I'd be in trouble if I didn't get something cooking for dinner. My boys know how to cook, but nothing I had in the house. So I dragged myself off the couch and scrounged through the pantry and freezer to find something to throw together for dinner. Soup is the easiest. It can just bubble away in the pot with no stirring. I can make soups that everyone in my family can eat, despite numerous food allergies. Soups are cheap and use up weird bits of leftover stuff. Soup tastes good. Soup is easy on sick tummies.

So, guess what I made for dinner last night? Soup. How'd you know? I even took a picture. 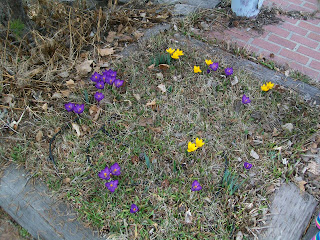 Not this picture. That's the crocuses blooming in my front yard. And the dead stuff we still haven't cleaned up yet. Yard work isn't very high on my priority list. 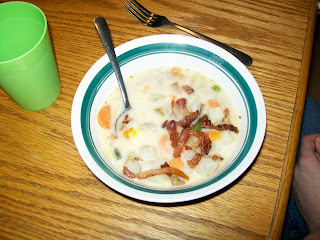 This is the soup.  Now that I look at the picture, it doesn't look that appetizing. My son had already started eating it. But it tastes good. Really. Trust me. Better than it looks. It was so good, it's all gone.

Saute onion in butter in large (3-4 quart) saucepan. Add diced potatoes, seasonings, and enough water to cover. Cover pot and simmer for 1 to 1 1/2 hours, until potatoes are tender. Add frozen vegetables. Cook another 5 to 10 minutes until frozen veggies are cooked. Add coconut milk. Cover and cook on low just until heated through. Add more salt if needed.

Meanwhile, cook bacon until crunchy. Serve as a garnish on the soup.