We're celebrating the launch of Spy for a Spy, sequel to I, Spy! Read on to get a tasty recipe and find free & discounted reads! You can also find Spy for a Spy at the special $3.99 launch discount on Amazon, Kobo, Barnes & Noble and JordanMcCollum.com! 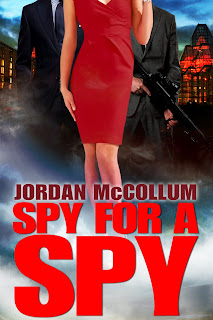 Canada is probably the last place you’d expect to find an American spy. And it was the last place CIA operative Talia Reynolds expected to run into fellow operative Brand Copley. AKA her new boss. AKA her ex-boyfriend.
Just the guy every woman wants to face in the middle of planning her wedding. Once again, Talia’s lying to the man she loves, but this time, to protect his heart. After Brand takes over Talia’s latest case and steals her newest agent, he assigns her to spy on her old boss—who’s suddenly giving her every reason not to trust him. With only weeks until the big day, planning falls by the wayside as she goes into damage control mode. But when Talia discovers Brand’s real motives, fighting him is the only option, no matter what the personal and professional cost. More about Spy for a Spy | Add Spy for a Spy to your Goodreads to-read list!

An award-winning author, Jordan McCollum can’t resist a story where good defeats evil and true love conquers all. In her day job, she coerces people to do things they don’t want to, elicits information and generally manipulates the people she loves most—she’s a mom. Jordan holds a degree in American Studies and Linguistics from Brigham Young University. When she catches a spare minute, her hobbies include reading, knitting and music. She lives with her husband and four children in Utah. Find Jordan on her website/blog, Facebook and Twitter!

Tell us about your writing - What genre do you prefer to write? What books, stories, other publications that you've written are your personal favorites? Anything new coming up? I mostly write romantic suspense. I love all my stories like I love all my kids—differently! My previous novel, I, Spy, is like a golden child who was just born with this fun, funny personality. Some manuscripts waiting in the wings are like the kid who just really always "got it," or the one who take correction really really well, and made you a better parent. (I need more kids like that!) My new novel, Spy for a Spy, is like the wayward child that you’ve had to fight with all growing up. Now that it’s out in the world on its own, seeing the first few reviews has shown me this baby is finally on the right path! ;) I’ve just started on the third book in this series, and I have another prequel novella waiting for edits, too. What writers inspired you to become an author? I don’t admit this often, but J. R. R. Tolkein definitely deserves some credit. My first attempt at a novel began as Lord of the Rings fanfic. I won’t be penning any more epic fantasy any time soon, but that was my first attempt. (I also switched my major to Linguistics because of him, but that’s another story.)

I haven't developed a recipe to go along with this book, but the first book in the series inspired one amazing culinary creation . . . chocolate chip maple pecan pie. Maple chocolate chip pecan pie. However you want to arrange it, it. is. DELICIOUS. 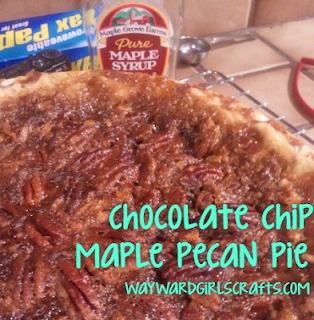 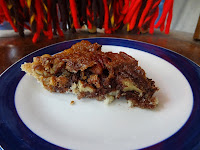 The pie was inspired by a real pie, made at a real restaurant. My characters get to visit Wilfrid's, the totally awesome restaurant at the (Fairmont) Château Laurier. Yep, I've been there—but I'm pretty sure they didn't have this dessert at the time, a specialty of Chef Ernst's. Since Ottawa is a bit far away right now, I made the pie at home. It's good chilled, but let me tell you: eat it warm. Nuke it if you have to. YES. Ingredients adapted from Pioneer Woman's Pecan Pie recipe. kind of a lot of adaptation 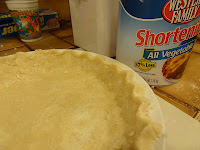 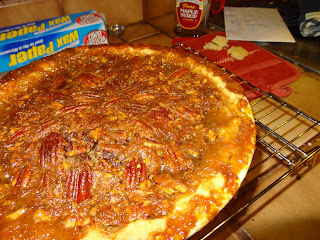 Originally posted at Wayward Girls' Crafts
In addition to being quite tasty, the pie makes a great prop. If you want to find out how I used it in my book, now is the perfect time because . . .

Spy for a Spy is a sequel to the novel I, Spy, available for 99¢ at Amazon, Barnes & Noble and Jordan's site this week only! To save her country and her secrets, CIA operative Talia Reynolds will have to sacrifice the man she loves. More about I, Spy. Also, as a free gift this week, Jordan is giving out free e-copies of a prequel novella, Mr. Nice Spy, on Amazon and her site!