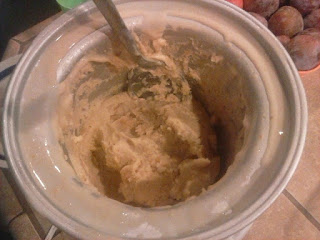 I have a pile of fresh peaches. And I want peach ice cream. I can't find any at the store. So I'll just have to make my own. And since I'm going to the effort of making it from scratch, I may as well make some that my daughter can enjoy too.

Whisk the egg yolks and honey together in a large metal mixing bowl OR the top of a double boiler. Beat for at least one minute - you want them well combined. Set aside.

Fill a saucepan or the bottom of the double boiler with hot water and bring it to a simmer over medium heat.

Stir a little of the hot milk into the egg yolk mixture. Beat well. Add the hot milk a little at a time until all of it has been stirred into the egg yolks. Place the bowl or double boiler over the simmering water. Cook and stir just until it thickens and coats a spoon, about 185°F or about 10-15 minutes. Remove from heat and let cool.

Pour into a covered container and refrigerate at least three hours.

Process the custard in your ice cream maker according to directions. When it starts to freeze up, add in the peaches. Let it finish processing.

Enjoy as soft serve, or freeze for later.