I've interviewed Frances several times. I love, love, LOVE her books, if you haven't figured it out yet. We met over a blog tour for her first book and mine and we have way too many things in common. She writes a lot more than I do, though, so she has a lot more books to read and celebrate. Make sure you check them out. Here's her newest release: 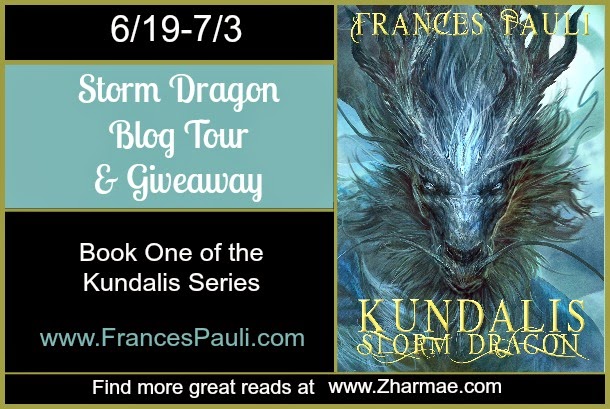 
Karin knows she’s gone completely insane—nuts—absolutely batshit crazy, when she spots an insidious blue dragon twining through the trees at a rest stop in the Cascade Mountains. Despite agreeing to join her roommate at a psychic fair, she’s never believed in anything metaphysical. She’s pretty sure the Reiki treatment she succumbed to has brought on a frighteningly realistic hallucination—until they roll their mini-van in the middle of I-90, and she is rescued from the vehicle by the same monstrous blue figment of her imagination.

She awakens to find that she’s been delivered to a cabin high in the mountains instead of to a proper hospital. The “doctor” looking out for her is more of a new-ager than a physician, and the people who own the house, including the urban highlander version of Fabio, don’t have any intention of letting her leave.

Faced with the unimaginable, and strapped to an all-too-real dragon, Karin must decide how to tame the beast or risk losing herself to it forever.

Check it out on Goodreads here.

We spent a while chatting about this, that, and the other, but mostly about the book. So without further ado, here is my interview with Frances Pauli on how she does dragons.

The dragon story started at a rest stop on the way back from convention. Lots of fresh ideas boiling in the brain after convention, and we were all dreading the impending return to mundane life but also beat from all the running and socializing and convention fun. I'd grabbed my coffee (of course) and was waiting for everyone to get back in the car, just staring off into the trees, and I thought, "what a great place for a dragon." Honest truth. The scene makes an appearance at the beginning of the book too, although in a different form. And I still haven't technically done high fantasy. This one is contemporary, full of dragons, and very light.

Is Kundalis your typical high fantasy, you know, shades of Tolkein and all that stuff? What makes it different?

So very much no. I love high fantasy, but the closest I've gotten is the Kingdoms Gone books. Kundalis will be contemporary fantasy or urban, though I hesitate there since it's all set in the half-empty wilds of Central Washington. The dragons in question are very real, but only physical part of the time, usually when it's least convenient. They attach to a human anchor like a parasite, but one that we find out has very unusual benefits as well.

How do you do dragons?

Different. We know I don't do anything "by the book." My dragons are physical manifestations of metaphysical energy and they come complete with ego and personality flaws that often amplify their anchor's traits. They have some unusual skills, can interact with and affect the physical world, but they can also go into stealth mode, where only their anchor can see and hear them.

If you could be any fantasy animal you want, which would you pick and why?

My children already think I'm a basilisk. It's the mom look. But if I could choose one, I've always been fond of griffons. They have the flight angle and yet can still defend themselves well. I'd say dragon, but I hate to pick the obvious. Not to mention the fire hazard!

Tell us more about your book. Will there be romance in this one?

Storm Dragon is fairly solid contemporary fantasy. As I mentioned, it is set in Central Washington, so there aren't a lot of urban elements, but Karin does clash with a dragon gang. The style is a lot more like the Shift Happens books, light, humorous, very snarky. Blue is kind of a smartass and Karin cusses a lot and dislikes almost everyone. As to romance, there is a romantic interest, but the book is definitely not a romance, nor does it have the tropes that romance readers usually expect. And if I say any more, I'll be in spoiler territory.

Spoilers? Better not say any more. If you're intrigued, go read the book. I'm sure you won't be disappointed.

Enter to win some free stuff: