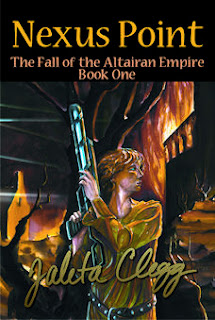 I promised this essay two weeks ago. That was before the flu and a whole lot of hairy deadlines. I've put a lot of thought into this topic. After Nexus Point came out in 2009, I struggled with defining what genre it fit in. Science fiction, yes, obviously. Maybe not. The only spaceship happens in chapter one, where it blows up, and the last couple of chapters. The whole middle of the book takes place on a low-tech world. So what sub-genre did it fit in?

Romance, of any subgenre, is a very different kind of writing. It's hard to describe because the differences are subtle. It has to do with where the emphasis is in the story, how characters are introduced and described, word choice, and sentence structure. Read enough romance novels and you can understand what I mean. Compare them with straight science fiction, murder mystery (not romance mystery), or fantasy. The fundamental structure is different. Romance puts the relationship, whether physical or emotional, at the forefront. Nothing else takes precedence over the romance.

Nexus Point is not Romance. Romantic, yes, a little, but not Romance. The story structure is wrong for a romance. Romance readers tell me it feels off. They like it, yes, the story is good, the characters are great, but the story itself is just not right. They're expecting the book to be structured and built like a Romance. Those who like science fiction tell me my story is fluff. It's not hard science fiction, it's not about the Great Idea or Science. They like it, but it's not "serious". It's too much romance, not enough science fiction.

If you look at readers of Romance, they are overwhelmingly women of all ages. Readers of science fiction, especially the hard stuff, tend to be men who don't like romance in their books. Look at the classic SF - characters are mainly men. Women are mostly decoration or set dressing. The audiences for these two genres are very different.

After much soul searching, deconstruction of genre, and lurking on websites, I've come to the conclusion that I write Space Opera. It's like summer beach reads for science fiction readers. Lots of action, lots of adventure, a touch of romance. Yeah, it's fluff, but entertaining fluff. So whatever genre you read, step out of your comfort zone this summer and try some space opera.

Nexus Point can be purchased from lots of online sites in many formats, including print. Check www.nexuspoint.info for a full list.