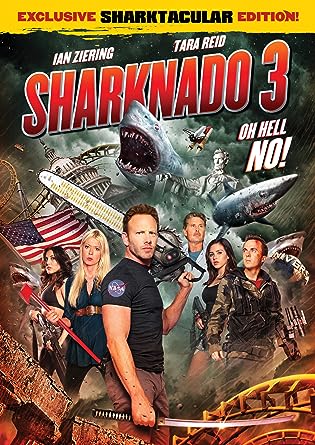 Yes, I was desperate. I needed something that required no brain cells. Sharknado 3 was on Netflix. It seemed like a good idea at the time.

This trainwreck of a poster for it pretty much sums up what you can expect from the movie itself. A total trainwreck of bad ideas. But SHARKS! Falling from tornadoes! Eating people! And CHAINSAWS!

It was enjoyable. We got a few good laughs. But yeah, it was beyond stupid. Much more watchable than the other two Sharknado movies, though. I tried the first one and couldn't make it through more than fifteen minutes. This one was such an over-the-top satire of just about every monster/action movie ever made that I think I've found a new favorite bad movie to add to my list.

Giant tornadoes of angry sharks are eating people all over the place - New York, Washington DC, DisneyWorld... And they are merging into a mega-Shark-icane. Like a hurricane but with sharks. And the only way to stop it is - wait for it! - to go into space. Yep. You heard it right. We have to go into space to stop a hurricane of angry sharks. And we stop them - SPOILER ALERT! but not really - punching them in the head. With a chainsaw. Then letting the giant one eat you so that as it falls to earth like a shark-meteor, you will be protected and survive the impact. And cut your way out with your chainsaw.

The science is non-existent. The plot is barely there. The gore is everywhere. Chainsaws abound. But I enjoyed it thoroughly. If you have no expectations, or very low ones, you might be pleasantly surprised. The movie isn't for everyone, but it was definitely my kind of movie.

Rating: PG-13+ for the amount of blood spatter and shark devouring people scenes