I attended SpoCon last weekend, a great SF/F convention in Spokane WA. It was their first year in a hotel. Things were a little crazy. I ended up not attending many panels, partly because few of them interested me and partly because things were so spread out and the rooms for the panels were tiny it was hard to get a seat. I still had a great time.

I ended up hanging out in their game garden with my daughter. They had stacks of games to try, everything from cards to dice to board games to ones hard to classify. I found two new favorites that are now part of my personal game collection. 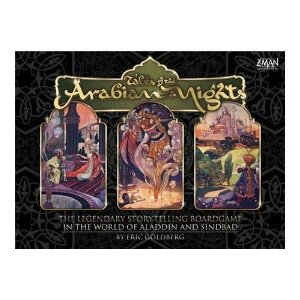 Tales of the Arabian Nights is a complicated storytelling game crossed with a board game. Don't let that scare you off. It's a lot of fun to play. Every turn you have an encounter. Based on where you are, which card you draw, and your dice rolls, you look up different story bits from the Book of Tales. Choose your reaction and all sorts of fun things happen to you. My first mission was to trade in three cities. Ha! I ended up insane, on a pilgrimage, and diseased. I had to buy the game so I could play more. This game is not about strategy or winning, it's about telling stories and having fun. It's a bit pricey, but well worth the money. I'd suggest this is for people with patience and good reading skills, probably age 10+. 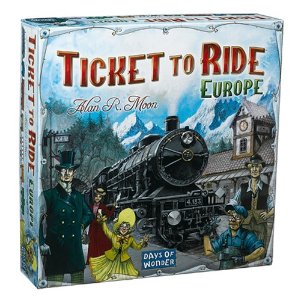 Ticket to Ride Europe is an interesting strategy game. You and up to four of your friends are building railroads through Europe. You get points for the length of each segment you build as well as finishing specific routes between cities. My daughter begged me to play with her. I gave in and ended up liking it enough to buy it. Another pricey game, but again, more than worth the price. Even my 8yo figured it out although the cards were a little hard for her to read. Plus, bonus, they learn pre-WWI European geography. A game lasts around an hour.


(I apologize for only giving Amazon links. If you have a specialty game store in your area, see if they carry either of these. You get a great game to play and they make a bit of money. Win-win, in my opinion.)